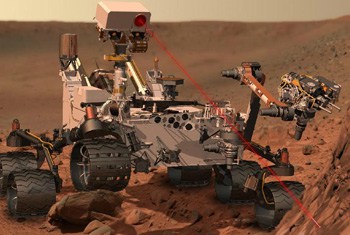 Artist’s conception of the Curiosity rover on Mars. Courtesy/LANL

Curious about Curiosity, the SUV-sized rover scheduled to touch down on Mars on Sunday? Then come to an opening party for a new exhibit this Sunday at the Bradbury Science Museum at 15th Street and Central Avenue in downtown Los Alamos.

The public is invited to the special opening reception at 10 p.m. Sunday Aug. 5 to celebrate Los Alamos National Laboratory technologies aboard the six-wheeled mobile science laboratory.

The Curiosity rover, the centerpiece of NASA’s Mars Science Laboratory mission, is scheduled to touch down on the Red Planet at 11:31 p.m. local time Sunday.

The museum plans to show the landing via NASA TV live that evening.

While waiting for the nail-biting news about the successful landing of the Curiosity rover, visitors to the new museum exhibit can learn about LANL technologies on board, view a nearly life-sized 3-dimensional stereo poster of Curiosity, and use their iPhone or iPad to interact with it. Light refreshments will be served.

“This is an exhibit about LANL technology on Mars. We’re really excited to showcase LANL’s scientific and technologic expertise while also providing an educational and fun experience for the public,” said Bradbury Science Museum Director Linda Deck. “We’ve been thinking about this for months and intensely working on it about four weeks,” she said, adding that the exhibit will remain in place indefinitely in the museum’s TechLab.

Museum visitors will find display models of ChemCam — the rock-zapping laser that will help characterize Martian geology — CheMin, which uses X-ray diffraction to determine the composition of mineral samples collected and dropped into a funnel on the Curiosity rover; and simulated radioisotope thermoelectric generators (RTGs), the tiny plutonium canisters that provide heat and power sources that give Curiosity several times as much electricity as previous-generation rovers — a necessity for the much larger and more-advanced payload on Curiosity.

The museum’s TechLab will have a dozen videos and animations about the Curiosity rover from NASA and the Jet Propulsion Laboratory.

Visitors can also pose for photos with a life-size image of the rover. A scientist from LANL’s Curiosity team will be on hand to talk to visitors during the opening event. For more information about Sunday’s special event, call 505-667-4444.

The Bradbury Science Museum is open every day except, Thanksgiving, Christmas and New Year’s Day.