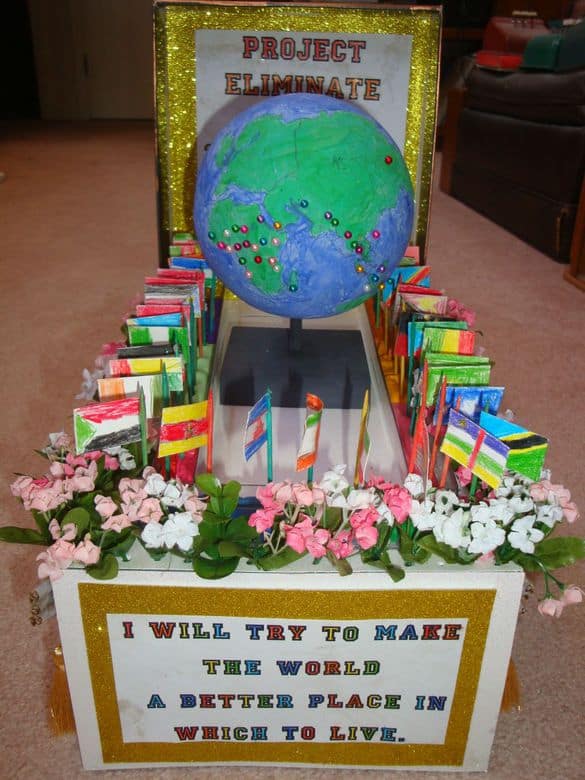 The float was an entry in a contest for all K-Kids Clubs around the world in support of “Project Eliminate.”

The Los Alamos float took second place at the international convention. First place went to a float from a Kiwanis Club in Malaysia.

The Barranca K-Kids constructed their entry from a standard size shoebox.

Their float depicts the flags of the 34 countries still at risk, and a 5″ diameter globe with colored pins to show the locations of these countries.

The motto on the front of the float is taken from the K-Kids pledge, which in part says “I will try to make the world a better place in which to live.”

Project Eliminate is a three-year collaboration between UNICEF and Kiwanis International to eliminate maternal and neonatal tetanus, which is a killer disease that is still prevalent in about 34 countries, notably in Africa and Indonesia.

Maternal and neonatal tetanus kill over 60,000 babies and mothers each year.

The effects of the disease are excruciating — tiny newborns suffer repeated, painful convulsions and extreme sensitivity to light and touch.

The leading causes of maternal and neonatal tetanus deaths are:

Maternal and neonatal tetanus is easily prevented by a series of three vaccinations to women of childbearing age, costing roughly $1.80.

If a woman is properly vaccinated with the tetanus vaccine, she will have immunity through the majority of her childbearing years, passing on her protection to her future children.

Babies born to mothers who have been vaccinated will be protected through the first two months of life.

Kiwanis raised awareness for iodine deficiency disorders (IDD), the leading preventable cause of mental disability, and nearly $100 million for salt iodization, testing and monitoring, and community outreach and education in developing nations.

These funds are now at work in more than 103 nations and about 80 million children in the developing world will be born free of IDD this year.

This project has been hailed as one of the greatest public health triumphs of the 20th century.

Donations to Project Eliminate can be made by sending a check payable to Kiwanis Club of Los Alamos to PO Box 94, Los Alamos, NM 87544.

Additional photos are available at: http://www.ladailypost.com/content/kiwanis-k-kids-mini-float