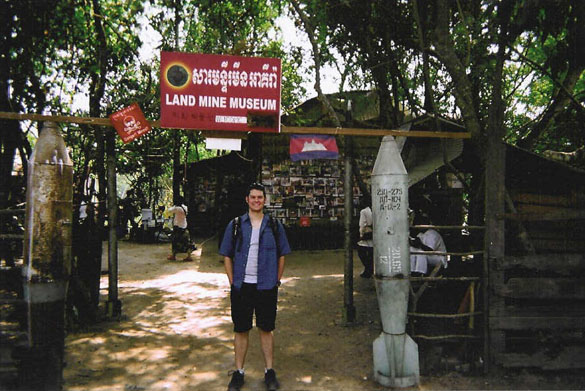 Los Alamos residents Andy Sutton and his wife traveled to Cambodia in 2006 for a vacation and what they encountered on their travels impacted them significantly.

“We were just traveling a little bit. We always wanted to go to Angkor Wat,” Sutton said. Besides visiting the ancient temple complex, the Suttons went to the Landmine Museum in Siem Reap where they learned about Aki Ra and his non-government organization (NGO), the Cambodian Self Help Demining (CSHD). In addition, Aki Ra operates an orphanage as well as Rural Schools Village Program, which establishes schools in areas his organization cleared of mines.

Sutton said the orphanage and schools take in children who are orphans or whose parents cannot support them. The students can eventually get scholarships and go to the university in the the city.  According to a 2010 CNN article, Aki Ra estimates that his NGO has cleared more than 50,000 mines.

Despite Aki Ra’s work, Sutton said Cambodian children continue to be maimed and killed by mines. The problem has not gone away. After his visit to the Landmine Museum, Sutton said he wanted to support CSHD and has sent money to the organization. But today, he will do more. Sutton is running the 15-mile race in the Jemez Mountain Trail Runs to raise money for CSHD.

“We’ve been there a couple of times; we’ve seen where the money goes and the impact it is having. It goes straight to support the kids,” he explained.

It is not just that CSHD is a worthy cause or the people the NGO serves need help; all of Cambodia pushed Sutton to raise funds. Sutton described Cambodians as the “friendliest, nicest, warmest people we ever met in the world.”

In addition to hitting the trials, Sutton has also setup a Go Fund Me account, https://www.gofundme.com/schools4cambodia. So far the account has raised $1,117. The goal is to raise $2,500 but “whatever is raised is good,” Sutton said. He added, “A little goes a long way.”

Sutton said he became interested in running and cycling  when they moved to Los Alamos nine years ago. He said he first participated in the Atomic Man Duathlon and “it kind of snow-balled since.” This will be his fourth time running in the Jemez Mountain Trail Runs. Sutton jokingly said his favorite parts of the race are the flat sections.

He added, “I think I enjoy it because it’s local … for me it’s a challenge. I never finished and thought, ‘that was easy.’”

He encourages people to visit his Go Fund Me page and support CSHD’s work, however they can. Even a few dollars donated means school supplies to the students. “A little makes such a big difference,” Sutton said.