Amateur Naturalist: The Forests Of The Cerros Del Abrigo 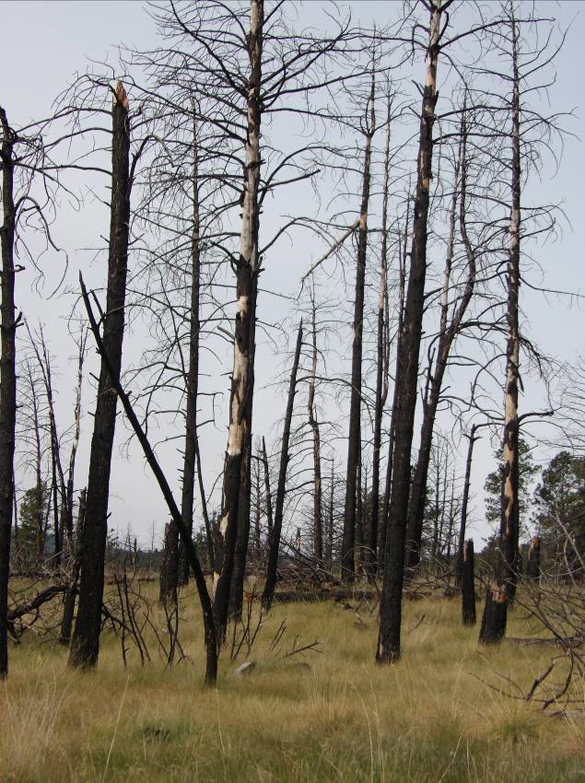 Grasses growing among burnt tree trunks at the start of the Cerro Del Abrigo trail. Photo by Robert Dryja

PEEC Amateur Naturalist: The forests of the Cerros Del Abrigo
By Robert Dryja
Clear cut logging in the early 1970’s left a large area of the Cerros Del Abrigo a blank slate for plant regeneration.
From this starting point different trees and grasses started to regrow. Three variables affecting the regeneration were: (1) the steepness of a slope; (2) more or less moisture; and (3) more or less soil available for growth. The Las Conchas forest fire created another level of variation depending upon how severe it was in an area.
Five major kinds of forest areas, (called communities) now can be seen as a person hikes to the summit of Cerros Del Abrigo.
Shallow slope/grass land
The slopes of the Cerros Del Abrigo are shallow around its base and then become increasingly steep while ascending to its summit. The shallow slopes mean that top soil has not been eroded as completely following the clear cut logging and forest fire of prior years. Grasses now dominate. They grow in fields among the burnt trunks of conifers and aspen.
Young conifer trees are not yet growing among the grasses five years after the Las Conchas forest fire. This may be due for several reasons. One reason is a lack of seed source. No living adult conifer trees remained in the area after the fire to produce seeds. A second reason is being in a transition area between grassland and forest. Cooler air accumulates in the bowl-like landscape around the Cerros Del Abrigo. The coolness makes it more difficult for new conifer trees to become established.
A third reason involves the suppression of smaller forest fires prior to the Las Conchas fire. Conifer trees could begin to grow out into grassland areas even though they were not in the most favorable area for their growth. More fire-free years may pass before conifers slowly regenerate.
The lack of young aspen trees involves a fourth reason. Aspen trees regenerate from roots. However there were no aspens in the area before the fire. Roots there did not exist to regenerate an aspen stand.
Rocky slope/burnt trunk land
The hiking trail follows one of the logging roads that circle the Cerros Del Abrigo. It has grasses and herbaceous plants growing on it at its start, but these fade as the elevation increases along the trail. The grasses similarly fade on the slopes on either side but burnt tree trunks remain. The increasing slope means that rain water can drain more quickly away. Soil also can be washed away. There are large gullies along several sections of the hiking trail and these further help to remove water. Conditions are no longer as favorable for grasses as well as conifer or aspen trees.
The environmental impact of the logging trucks stands out in this area. The trail remains a distinct rocky strip, forty to fifty years after the logging stopped. The rocky slope next to the trail has meager plant life but the plant life is far more abundant in comparison to the trail. Soil compaction from trucks makes precipitation run off the road rather than soak into the soil. The precipitation heads to the downhill side of the road where it soaks in and promotes plant growth.
Maturing forest
There are numerous deadfalls of burnt trees across the hiking trail while passing through the rocky slope area. A hiker needs to be prepared to clamber over, under and around charred deadfalls in which several trees have fallen together across the trail.
A pleasant change occurs in a space of about one hundred feet when the hiking trail enters an unburnt section of forest. Conifer trees line both side of the trail. The trail becomes softer underfoot due to the grasses and herbaceous plants growing upon it. Some of the conifers are large, suggesting that at least a few were not part of the clear cut logging.
Aspen land
The section of conifer forest may have been protected from the forest fire because it was growing by a felsenmeer. A felsenmeer is a broad and rocky slope devoid of plant life. As such, the felsenmeer may have blocked the flames of the fire from crossing downwind to the forest.
However the fire would have burnt the trees on the upwind side of the felsenmeer. An aspen forest now is growing on the steep and rocky slopes of this upwind side. These younger trees are growing among the vertical burnt trunks of the older aspen trees. The aspen trees dominate rather than grasses, unlike what occurs among the burnt conifer trees at the lower elevation.
Developing Alpine grassland
The summit of Cerros Del Abrigo has relatively level slopes compared to its sides. A meadow is on the south-facing slope, just as there south-facing meadows on top of the Cerro Grande and Cabello peaks. Other parts of the summit are composed of denser stands of burnt conifer or aspen trees. Given enough years, these trees will fall and become a part of the soil. The summit of Cerros Del Abrigo could become alpine grassland interspersed with forests of aspen and conifer in coming decades.
Exploring down the Rabbit Hole—Learning more like Alice
Interested in the botany of the Valles Caldera?
Esteban Muldavin, Paul Neville, Charlie Jackson, and Teri Neville: A Vegetation Map of the Valles Caldera National Preserve, New Mexico is available at:
https://nhnm.unm.edu/sites/default/files/nonsensitive/publications/nhnm/U06MUL01NMUS.pdf
Interested in the impact of forest fires and cooler air on the growth of forests?
Jonathan D. Coop and Thomas J. Givnish: Constraints on Tree Seedling Establishment in Montane Grasslands of the Valles Caldera, New Mexico is available at: http://onlinelibrary.wiley.com/doi/10.1890/06-1333.1/abstract
Interested in an overview of the ecology and historical use of the Valles Caldera, including logging?
Marie Rodriguez: Physical, Cultural and Socioeconomic Setting is available at: http://www.fs.usda.gov/Internet/FSE_DOCUMENTS/stelprdb5383831.pdf
Have questions, comments or interested in field trips to the Valles Caldera? Pajarito Environmental Education Center (PEEC) will be opening a forum in January 2017 at its website (www.peecnature.org). Plan to be sending your notes to the forum. 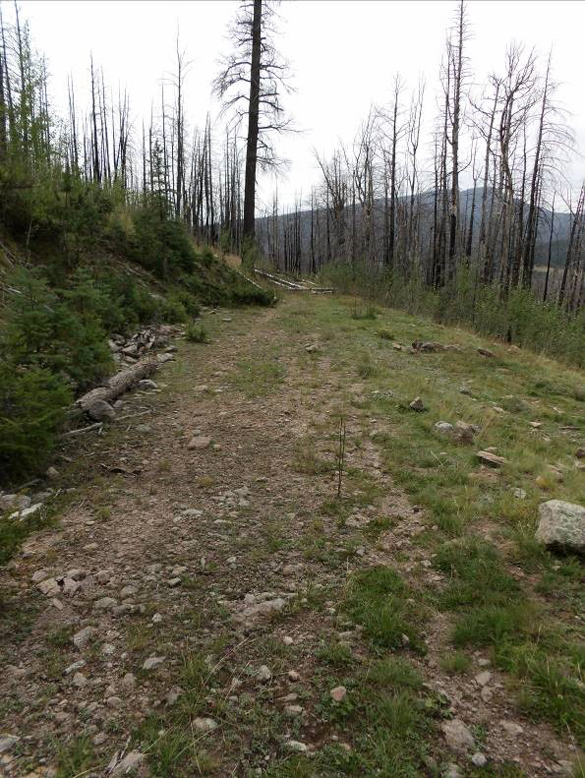 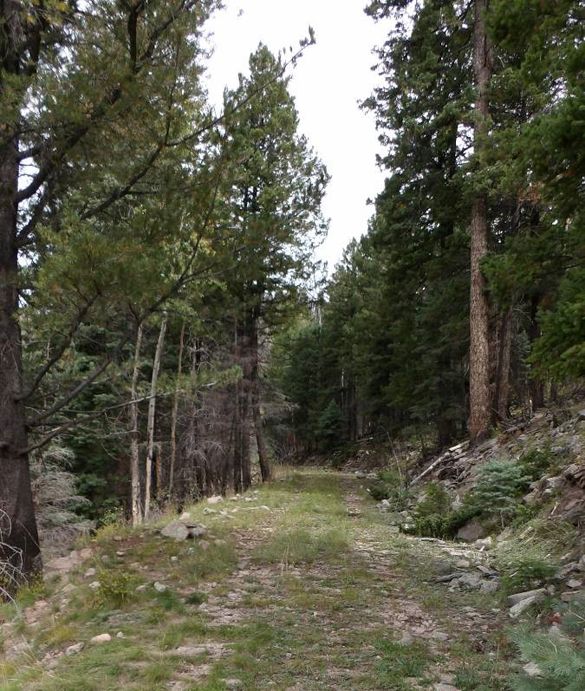 A shady and maturing forest with a green trail occur where there has not been a forest fire. Photo by Robert Dryja 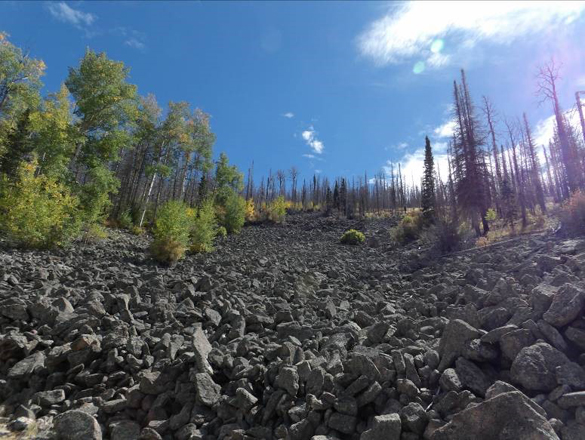 Burnt trees are on the right side of the felsenmeer while living trees are on its left side. Photo by Robert Dryja 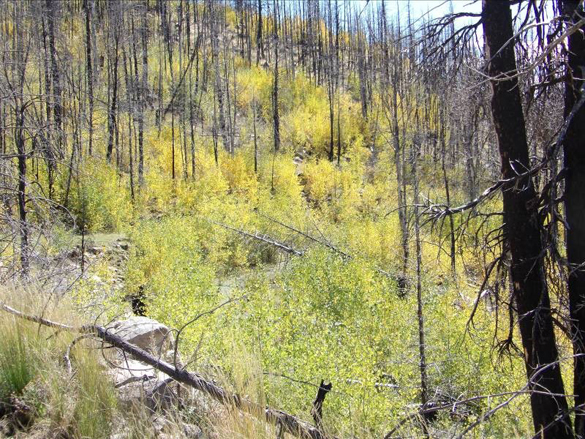 Young aspen trees growing up to six tall are on the burnt slope instead of grasses. Photo by Robert Dryja 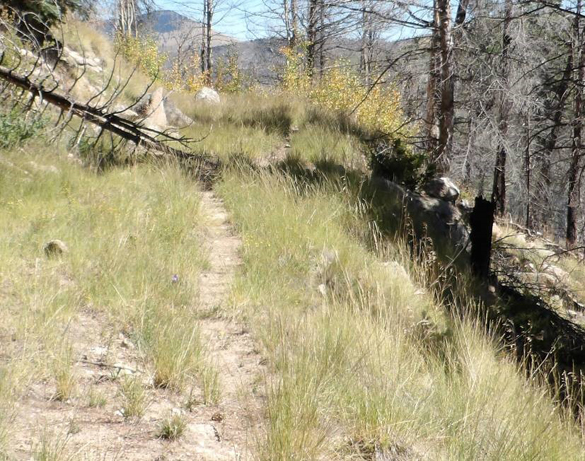 Grasses grow on a logging road toward the summit. Elk have created a trail along it. Photo by Robert Dryja 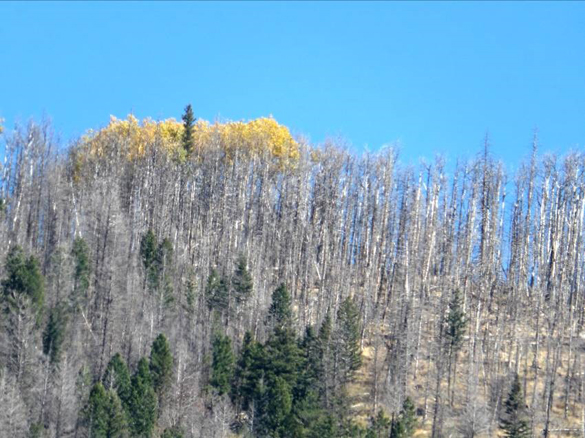 A stand of burnt aspen trees at the rocky top of Cerros Del Abrigo. A small stand of living aspen remains with its leaves turning yellow in the autumn. Photo Robert Dryja
Menu
LOS ALAMOS