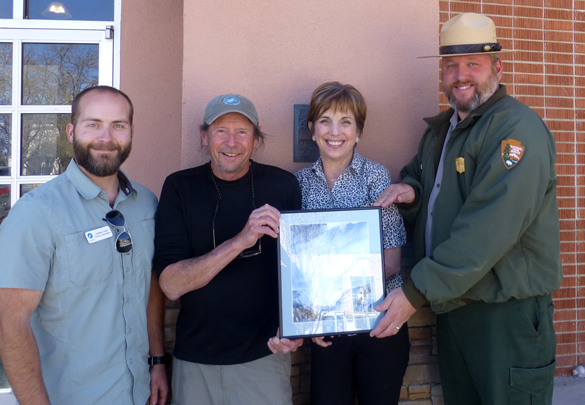 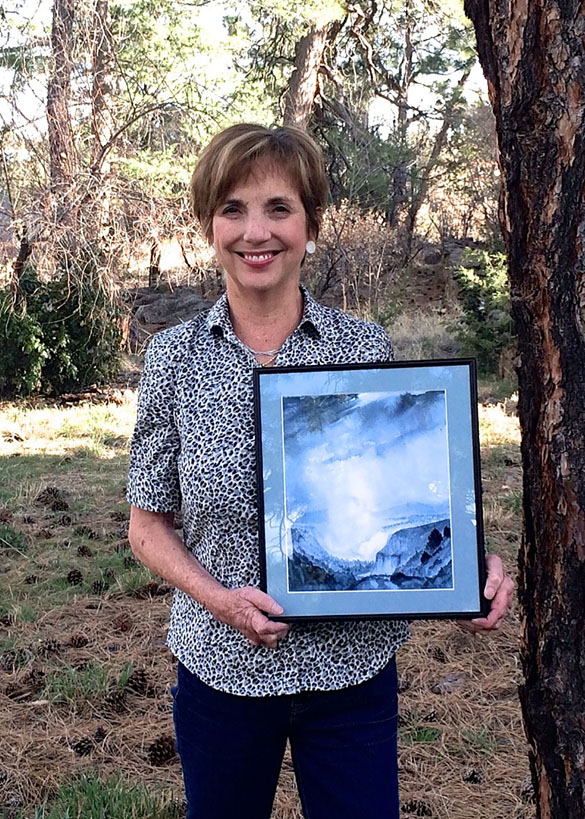 By TERRY FOXX
Friends of Bandelier
The Board of Friends of Bandelier have chosen Mountain Elementary School teacher Michele Altherr of Los Alamos to receive the 2017 Dorothy Hoard Stewardship Award.
Altherr was selected for her work with the children of Los Alamos and her many contributions to the Pajarito Environmental Education Center that have enhanced Los Alamos as a place where discoveries of nature and the out-of-doors are made. As she reminds us, “play outside and explore the wonders of nature.”
Whether you are a child or an adult, the restorative power of nature has been shown to improve imagination and physical and mental health. Because of Altherr’s advocacy, Los Alamos has experienced many ways to “play outside and explore the wonders of nature.”
This has contributed to the health and well-being of the community. Altherr was a co-founder of Pajarito Environmental Education Center in 2000. Because of the founders, many hours of effort by Board members and community members, in 2014 Los Alamos opened a spectacular Nature Center, run by Pajarito Environmental Education Center (PEEC). In 2016, the Nature Center had an annual visitation of more than 18,500 visitors and served more than 6,500 school children.
But Altherr did not stop with the idea of a Nature Center, she developed engaging programs offered by PEEC that have touched the lives of many children — from community residents, New Mexico residents from Espanola to Albuquerque, and those who live in other States. Programs such as Nature Odyssey, Park Flight, Birds with a Purpose and other outdoor programs took children on voyages of discovery from the Valle Grande, to Bandelier, and the Rio Grande. They learned from local naturalists, scientists, artists and gardeners. Most of all the children grew in personal confidence, and played, making learning about the landscape their own.
Michele also promoted clubs that focused on children making a difference to their community. The children in her PEEC after school Kinnikinnik Club learned about the habitat needs of butterflies and built a butterfly garden designed and advocated by Dorothy Hoard, which won an award from Keep New Mexico Beautiful. The Kinnikinnik kids went on to run a yearlong reusable bag campaign, which resulted in Smith’s Marketplace receiving recognition from their corporate office for their dramatic decrease in plastic bag use.
Michele initiated and sponsored another club at Mountain School, the “Green Team.” This team of students led a school-wide Cool the Earth Project to reduce personal carbon footprints. Another year they led the school in a competition to collect and recycle the most aluminum cans. The team counted, calculated and publicized their efforts, which resulted in a win. The children chose to donate their $2,000 award to an animal rescue group. They followed this up with a school-wide campaign to collect and recycle the most plastic bags in the State of New Mexico. They squeaked out a win and the bench they won sits proudly in front of the school.
More recently, she and her friend Selvi Viswanathan led the successful effort to identify Los Alamos Certified as a Wildlife Habitat. This included her Green Team kids planting habitat friendly gardens and certifying Mountain as a schoolyard habitat. Beyond all this Michele has been a busy teacher for 20 years who is passionate about making learning active and relevant whether the subject is in science, math, reading or writing.
Altherr developed her love of the out-of-doors playing in the woods and streams of the Maryland countryside. She graduated from the Florida Institute of Technology with a BS degree in ecology. She met her future husband there. They have two children, who are now often found working and playing in the outdoors. She received her elementary education degree from UNM and her educational leadership MA degree from Highlands University. She is a graduate of Leadership Los Alamos and has served on the Parks and Recreation Board and the Board of Directors for PEEC, at one time serving as president. In her spare time, Altherr loves xeric gardening, hiking and collecting folk art.
The Dorothy Hoard Stewardship Award is a yearly award given in the name of Dorothy Hoard who founded Friends of Bandelier in the 1988. The Board has determined the award will be given to someone who has contributed to the health and well-being of our landscape and environment in March, the anniversary of Dorothy’s passing. Dorothy died in 2014 and the award is her legacy to her advocacy for the landscape she loved.
The award includes a picture of Bandelier painted by Dorothy. The recipient can choose a $1,000 project for Bandelier in accordance to their passion for the environment. Previous recipients are Dale Coker and John Bartlit.
The Board is excited about awarding Altherr the Stewardship Award. We feel children are the future and the ones that will hold Dorothy’s legacy in their hearts in what they do to protect our Earth. Teachers are essential to this ongoing process of getting us out, enjoying our landscape, and learning about stewardship.
This year, Alth err and Bandelier National Monument have decided on a project which will involve students in the development of a mobile visitor tool used to explore the natural environment. The project will begin in the fall of 2017. 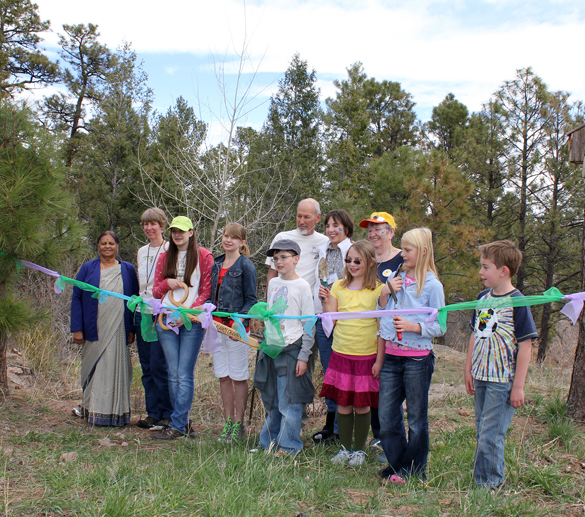 Kinnikinnik Club and the Dedication of the Butterfly Garden in 2010. Courtesy photo
Menu
LOS ALAMOS