Algorithms and Complexity for Quantum Computing 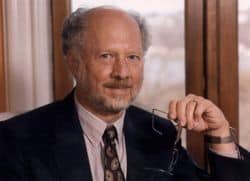 Joe Traub, Edwin Howard Armstrong Professor of Computer Science, Columbia University; External Professor, Santa Fe Institute will present “Algorithms and Complexity for Quantum Computing” on Wednesday, June 6th at 12:15 p.m in the Medium Conference Room.
Abstract:  Are quantum computers more powerful than classical computers? To answer this question one must know the classical computational complexity.  What is it about the problems of quantum chemistry and quantum physics that enables us to get lower bounds on the classical complexity?  We also introduce a new classification of quantum speedups.
We then turn to a particular problem, the ground state of the time-independent Schroedinger equation for a system of p particles.  The classical deterministic complexity of this problem is exponential in p.  We provide an algorithm for solving this problem on a quantum computer whose cost is linear in p.  We discuss whether this exponential separation proves that quantum computers are exponentially more powerful than classical computers.
We end with a selection of research directions and where to learn more.
http://www.santafe.edu/gevent/detail/science/995/
The Santa Fe Institute’s mission is to foster a transdisciplinary research community that endeavors to expand the boundaries of scientific understanding. Its aim is to discover and comprehend the common fundamental principles in physical, computational, biological, and social systems that underlie many of the most profound problems facing science and society today.

Traub is author or editor of ten books and some one hundred twenty journal articles. He is Editor-in-Chief of the Journal of Complexity and Associate Editor of Complexity.

His numerous honors include election to the National Academy of Engineering in 1985, the 1991 Emanuel R. Piore Gold Medal from IEEE, and the 1992 Distinguished Service Award, Computer Research Association. He is a Fellow of the American Association for the Advancement of Science, the Association for Computing Machinery, and the New York Academy of Sciences. He has been Sherman Fairchild Distinguished Scholar at the California Institute of Technology and received a Distinguished Senior Scientist Award from the Alexander von Humboldt Foundation.  He was selected by the Academia Nazionale dei Lincei in Rome to present the 1993 Lezioni Lincee, a cycle of six lectures. Traub received the 1999 Mayor´s Award for Excellence in Science and Technology. The Award was presented by Mayor Rudy Giuliani at a ceremony in New York City. In May, 2001, he received an honorary Doctorate of Science from the University of Central Florida.

He has served as advisor or consultant to the senior management of numerous organizations including IBM, Hewlett-Packard, Schlumberger, Stanford University, INRIA (Paris), Federal Judiciary Center, DARPA, NSF, and Lucent Technologies. In 2008 he was elected to the Board of Directors of the Marconi Society.