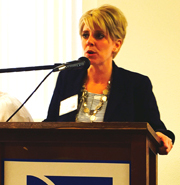 “For the sixth year, New Mexico educators heard the same policy proposals, and like the past six years, the Governor has only provided proposals that would lessen the quality of public education in New Mexico.

“According to our Governor, anyone who opposes her reforms are ‘status quo’ champions of ‘mediocrity,’ but thousands of hard working New Mexico educators do consider ourselves champions – we are champions for our students, champions for our communities, and champions for quality public education in New Mexico, and if our Governor would spend time in our schools for more than just a photo opportunity, she would already know that.
“The Gov. is right about one thing, however, the ‘status quo’ is alive and well in New Mexico. The status quo is calling for more funding for pre-K, yet refuses to use the Land Grant Permanent Fund to support our youngest learners. The status quo is knowing other states have repealed their failed mandatory flunking laws, and still call for mandatory flunking in New Mexico. The status quo is having historic shortages of veteran educators in our classrooms, and telling New Mexico parents they should be satisfied with non-licensed instructors replacing full-time educators. The status quo is allowing educators to go without raises for seven years, and then offering bonuses to a fraction of educators based on an unsound evaluation system. The status quo is underfunding our schools, and then offering educators an insulting $100 debit card to cover supply shortages in their classrooms. The status quo is lamenting the high cost of a college education, yet refusing to fully fund the Lottery Scholarship.
“New Mexico Legislators should rightly reject the so-called reforms of this Gov., as they have for six years, and fully fund our public schools by investing in universal early childhood education, earlier and better quality reading intervention, halting the excessive testing of our students, replacing the court-ruled abusive teacher evaluation system with one that actually helps educators improve their skills, and pay all school and higher education employees a salary which not only attracts, but retains our best and brightest.
“The policies New Mexico educators stand for – and fight for – are policies which are student and community focused, and for those of us who are in classrooms and schools every day, we can see the progress being made, despite the consistent lack of support from this Governor. She would see this if she stayed for longer than just a photo opportunity.”
Menu
Los Alamos
52°
Fair
6:59am4:51pm MST
Feels like: 52°F
Wind: 5mph SSE
Humidity: 26%
Pressure: 30.22"Hg
UV index: 3
SatSunMon
55/36°F
55/28°F
46/34°F
Weather forecast Los Alamos, New Mexico ▸