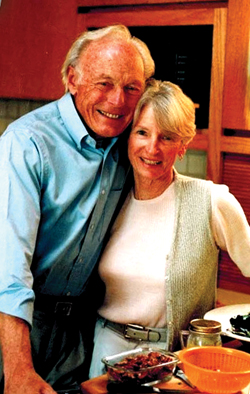 To know Don Liska was to know the huge fervor he had for life.

On the anniversary of his birthday, I recall many fond memories. I met Don in 1953 at the University Of Wisconsin while rock climbing with the Hoofers at Devil’s Lake near Madison.

We married and after a few years in Culver City where Don and I worked at Hughes Aircraft, we started on our first big trip joining an American Youth Hostel trip in Russia. It was the first year of Russia’s Intourist. Then we continued on to Europe and the British Isles staying in Youth Hostels while climbing in the Alps (The Matterhorn, etc.) and the Dolomites and after the summer of climbing, we biked for two months.

Next we made our way to Seattle where Don got a position at Boeing and I went to Cornish Art School. We lived for 10 years in our cute old 1940s Masonite house trailer, 29 feet long and a 200 square foot interior.

Although they didn’t match his Boeing salary, LANL employed Don in 1966. We cared more about our lifestyle than money and working at the Lab and being in a small community was most important. Within a few days we joined the Los Alamos Mountaineers.

Don was dedicated to his work at the lab, making the decision to retire was a struggle, therefore causing him to be the last person to sign up for the 1993 V-RIP. During his 27 years at the lab he went on leave for one year to work at Rutherford Labs in England and one year at CERN outside Geneva.

For years we traveled the world climbing, skiing, and biking. We traveled for the outdoor activity and for tourism. We camped at the side of quiet country roads and in farmer’s fields. Once biking in France in a total foggy white-out we were forced to stop in a farmer’s field in midday. The farmer’s family welcomed us into their home and we had a delightful evening with them and their guests. They didn’t speak English but we had a lot of laughs. We also really liked road trips in our beautiful country.

In 1970, a San Francisco lawyer fell while descending Shiprock and was severely injured. The Los Alamos Mountaineers rescue team saved him and both Larry and Don still have President Nixon’s COMMENDATION “in recognition of exceptional service to others” hanging on the wall in their homes.

In 1971, a cold, cold winter in Los Alamos at minus 16 degrees F., Don walked to work from Nickel Street just for the chill of it!

In June of 1986, Don, Mike and Walt, a long time climbing friend from California, scaled the Golden Gate Bridge in the dark. Luckily they didn’t get caught! Not to be tried today!

Forever curious, Don was a voracious reader: books, magazines, the newspaper, about the world, exploration, expeditions, adventures, the wars, airplanes, ships, history and politics. He liked poetry and memorized many Robert Service poems. Our favorite was “Just Think”. He belonged to a reading group and later a play-reading group. A wonderful writer and good with words, he frequently wrote “Letters to the Editor”. For years Don also wrote many climbing articles for outdoor magazines. He was my dictionary and I was his telephone book. (Everyone needs a live telephone book!) He enjoyed music, lectures, performing arts, movies and entertaining in our home, etc.

While Don was recovering from knee surgery, he made many model airplanes. As I write, they fly above our kitchen sink.

Also he loved and respected our earth. He was strong of mind and body like his family, and like his dad he was a fix-it guy. At 85 years old he had much more to live for. He was not ready to die. Don would have liked to be at his own memorials. I received 165 sympathy notes and I THANK all of you very much. There were over 100 people at the military cemetery and pushing 200 people in our home the following day. Today, November 3, would be Don’s 87th birthday.

Don gave me a life of magic.