‘Yes Vote’ On LAPS Bond Would NOT Increase Taxes 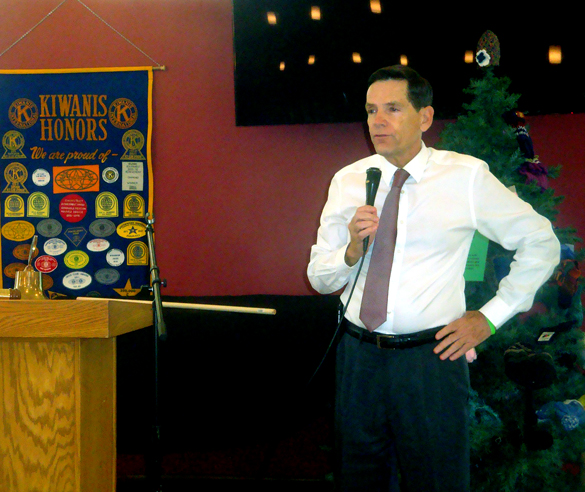 The ballots will be mailed out to registered voters Tuesday, Jan.3 and must be back in the Los Alamos County Clerk’s Office by Jan. 24 to be counted. They may be hand delivered or mailed—but if they are mailed, they must ARRIVE by Jan. 24.

One “box” on the ballot asks voters whether they want to provide money for public-school repair and rebuilding projects in Los Alamos and White Rock, and the other “box” asks whether the voters support a one-mil increase in the levy supporting staff and programs at the University of New Mexico-Los Alamos.

“I personally will vote yes on both,” Steinhaus said, and focused his talk specifically on the public schools question.

Steinhaus has a background that makes him unusually qualified to discuss local schools. He is a Los Alamos native who attended Canyon Elementary School and Cumbres Middle School, and graduated from Los Alamos High School in 1972. He also holds degrees from the University of New Mexico in Albuquerque and from the University of Oregon in Eugene. He has two master’s degrees, one in music (French horn) and one in computer science, and a doctorate from UNM in “educational leadership and organizational learning.” He worked for Los Alamos National Laboratory for 16 years before becoming the superintendent of schools in 2015.

Steinhaus was accompanied at Kiwanis by Pamela Miller, an Indiana native and former principal of Barranca Mesa Elementary School who is now chief academic officer for the Los Alamos Public Schools. She is coordinating speakers on the bond election.

Steinhaus said (and literature from the Community School Bond Election Committee emphasized) that if the bond passes, it will raise $13 million for the schools. The No. 1 project on the schools’ list is the design, rebuilding, and renovation of Barranca Mesa Elementary School. The plan is to replace 60 percent of its classrooms, remove all portables, and improve energy efficiency at an estimated cost of about $12.8 million.

The bond also would pay for several projects at Mountain Elementary School: enclosing of the 200 Wing and hallway to the 100 Wing; upgrading of restrooms and the nurses’ office to comply with Americans with Disabilities Act (ADA) requirements, and replacing of the roof.

At Chamisa and Piñon Elementary Schools in White Rock, the bond would pay for upgrades to the heating, ventilation and air conditioning system; “protective maintenance”; and improvements in energy efficiency.

For Los Alamos High School, bond money would provide a new Field House at Sullivan Track and Field, and it would pay for safety improvements, bathrooms and improvements involving concessions and the athletic trainer. It would also pay for replacing the boilers in E Wing, in Smith Auditorium and at Griffith Gym.

Steinhaus noted that Barranca is 40 years old. The flyer he circulated at the meeting states, “This aging structure is costly to maintain and has become a financial burden to the schools and the community.”

Turning to the history and results of previous school bond issues, Steinhaus noted that the voters approved a $40 million bond in 2009, and a $20 million bond in 2013. With the money from those bonds, the schools replaced the A-D Wings at LAHS, and completed many other renovations at the high school in January 2012 and the summer of 2016. Bond money paid for building replacement and renovations completed in October 2013 and 2016 at Los Alamos Middle School. It paid for safety improvements at every school. And it provided for “significant protective maintenance and energy efficiency upgrades.”

Steinhaus showed an extensive series of photos of the improvements done with the earlier bond money. He spoke of those projects as “promises made, promises kept.” And he emphasized that the bond proposal before voters in January will be a continuation of the earlier work and will not require an increase in taxes.

He noted that because of Los Alamos County’s Manhattan Project history, most of its school buildings were built at about the same time and are now wearing out. The school system is replacing or rebuilding them one by one. “This bond … is for bricks and mortar,” he emphasized. Because of the nature of school funding laws in New Mexico, none of it can be used for salaries.

He also pointed out that the school system is “a member of the community.” “We talk to each other,” he said, and he told of a recent case in which the laboratory hired one member of a family, and that person’s spouse had “an education degree.” The spouse is likely to end up working for the school system. In addition, the quality of the schools here helps to attract good, new employees to the lab. “The thing that seals the deal is the schools,” he said.

Several people in the audience asked questions after Steinhaus completed his talk. One person asked what a voter should do if he/she doesn’t get a ballot in the mail and the Jan. 24 deadline is approaching. Steinhaus said the voter should contact the County Clerk’s Office, which will provide a replacement ballot and keep track of the transaction.

Another person asked how the School Board decided what projects would be funded. Steinhaus said the board spent four months on the issue, hiring a firm to assess needs and conducting many public hearings.

The final questioner asked about funding improvements to Smith Auditorium. Steinhaus said the County Council has established a process to help the schools and has used county money to hire a contractor to work on what is estimated to be about $1.3 million in improvements to the auditorium—a facility that is on school land but serves the entire community. Steinhaus said he hopes that next year, the whole front of the auditorium will be redone, but, he said, the work will NOT be paid for with school bond money.