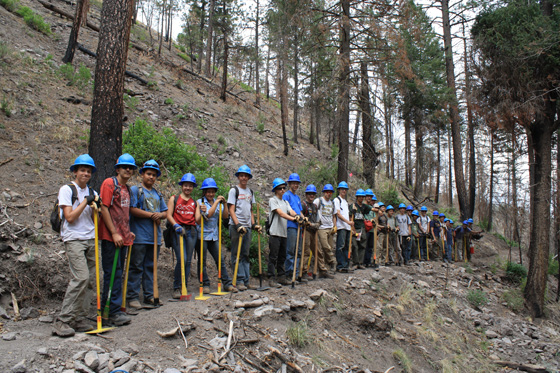 YCC crew at work on the switchback in Canyon de Valle. Photo by Sylvan Argo

The crews began June 3 taking on their first couple of project locations with enthusiasm and creative vision, with returning crews helping new members and everyone applying newly learned techniques and concepts to re-establish and rehabilitate trails that suffered damage in recent fires, YMCA staff said.

As of June 14, the 2013 YCC of The Family YMCA YCC Crew has made significant progress on two of the work locations, Water Canyon and Canyon de Valle. Time has been primarily focused on the Water Canyon project as per the designated dates with two dates allotted thus far to Canyon de Valle, due to extreme heat in Water Canyon.

For Water Canyon, the trail layout has been finalized and approved from Sawmill Meadow to American Springs Road.

Approximately 2,100 feet of tread have been completed, most of which has been rerouting work. Erosion control and sustainability have been a primary concern with grade dips being utilized to divert water from the trail tread. Several boulders and trees have been removed from the tread and many sections have required extensive brush clearing and root removal.

In Canyon de Valle, approximately 3,500 feet of trail have been rehabilitated. This included widening and out-sloping tread, clearing vegetation, cutting proper back-slope, and removing berms. Again, erosion control was a primary concern and as such, more than 50 rolling grade dips were installed and many one rock dams were built above and below trail. Additionally, confrontational material was used to discourage off tread travel in sections where social trails were prominent while gravel and loose rocks were removed from sections of true tread to encourage use.

Forest closures went into effect Monday, but YCC will still have access to its project work sites, thanks to an exemption letter and permit from Santa Fe National Forest, so work will continue as planned.