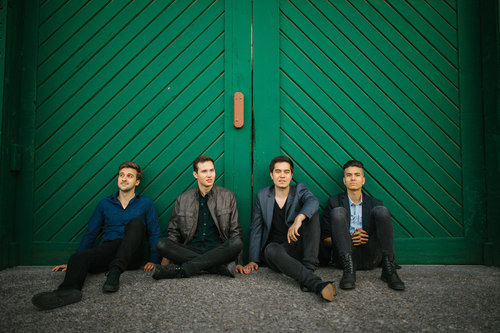 The Exchange will perform at the Midsummer Rock Bash July 1 at White Rock Baptist Church. Courtesy photo
CONCERT News:
WRBC Infinity Squared Music presents the Midsummer Rock Bash. The Exchange will perform in concert Wednesday, July 1, with the doors opening at 6:30 p.m. and the show beginning at 7 p.m. at White Rock Baptist Church.
The band is from the Seattle area and touring Cailfornia and Arizona on its way to perform in Los Alamos.
The Exchange is “a pop-rock band consisting of brothers Britt and Jack Espinosa, and Tyler Mays, according to the group’s bio. “With a new album set to be released this year, expect new songs and a renewed energy in this tour “with new sounds and textures … the new album touches on a broad range of topics, but the songs center around identity.”
This is music for all ages, and everyone is encouraged to attend. Free show, but donations are appreciated.
For more information, visit https://www.facebook.com/events/1456892731288780/, http://www.theexchangerock.com/ and wrbcnm.org.

Born in the quiet Pacific Northwest town of Kingston, Washington, The Exchange is a pop-rock band consisting of brothers Britt and Jack Espinosa, and Tyler Mays. Lately, the group is host to an ever-widening audience as they bring their electrifying concert experience and upbeat outlook to cities across the western U.S.

From self-booked national tours and major festival slots to weekly spins across radio networks like The Effect and K-Life, The Exchange has already accomplished a variety of feats as an independent artist. Still, the group is known for their down-to-earth attitude and for being highly personal with their fans. For The Exchange, it is long-time tradition for each band member to spend time with the audience after concerts. “Since the beginning” says Britt Espinosa, “we’ve wanted to be that band that we wish our favorite bands were to us. Even if it means getting four hours of sleep before a long drive, the period of time after a show is critical because it gives us a chance to connect with fans on a level that simply isn’t possible on CD.”

The Exchange initially formed to perform at a local church event in 2010. Soon after, they cut their debut EP “Show Me How to Love” with producer Neil Young (Needtobreathe, Third Day). Fusing elements of rock, pop punk, and praise music into an energetic package, the 2011 release would go on to sell 7,000+ copies in two years.

2012 saw the group’s first self-booked tour of the western US, and the release of two new singles. In the spring of 2013, The Exchange recorded their self-titled followup release with producer Brooks Paschal (VersaEmerge, Brian Howe, Sullivan). The remainder of the year saw more touring, a main stage slot at Creation Festival NW, and an increasing radio presence in the Northwest. After releasing their second EP in late 2013 and solidifying their lineup in early 2014, The Exchange found themselves in an opportune position to expand their sonic landscape.

Tried and true from a busy tour schedule in 2014, The Exchange is back and ready to deliver something fresh and exciting to the music industry. With Britt Espinosa at the helm of lead vocals, the band has released a new single titled “Spin,” the first from a full-length release to come in 2015. “We’ve had a lot of fun crafting the songs on this album, because we were able to experiment with new sounds and textures we had never used before,” says Jack Espinosa. According to Mays, “the new album touches on a broad range of topics, but the songs center around identity. In these times, so many of us want to know who we are, and we try lots of different stuff in desperation just to find out. This release deals with that struggle and push to find what we’re here for.”

Despite their years of tour experience, no member of The Exchange is over 21. Through growing into a more eclectic sound, maintaining a strong work ethic, and prioritizing a personal touch with their fans, The Exchange have demonstrated maturity beyond their years. In an age where trends come and go, and stars rise and fall at viral speed, it is bands like The Exchange who will not be washed back and forth by the tides of the latest craze. With a sense of purpose, drive, and identity extending far beyond their music, it is no doubt that this group is here to stay. Keep an eye out for a full-length album from The Exchange in 2015.