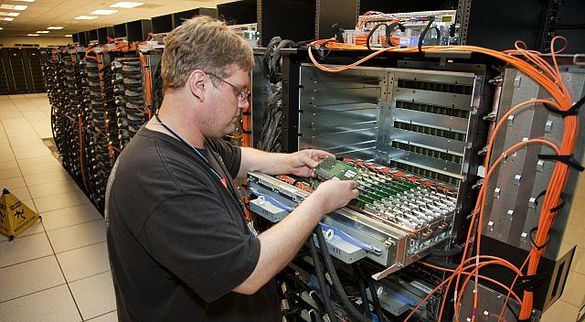 Every six months, the biggest supercomputers have a giant race to see which can lay claim to being the world’s fastest high-performance computing cluster.

Clocking in at 16.32 sustained petaflops (quadrillion floating point operations per second), Sequoia earned the number one ranking on the industry standard Top500 list of the world’s fastest supercomputers released today, Monday June 18, at the International Supercomputing Conference (ISC12) in Hamburg, Germany. Sequoia was built for NNSA by IBM.

A 96-rack IBM Blue Gene/Q system, Sequoia will enable simulations that explore phenomena at a level of detail never before possible.

“Computing platforms like Sequoia help the United States keep its nuclear stockpile safe, secure, and effective without the need for underground testing,” NNSA Administrator Thomas D’Agostino said. “While Sequoia may be the fastest, the underlying computing capabilities it provides give us increased confidence in the nation’s nuclear deterrent as the weapons stockpile changes under treaty agreements, a critical part of President Obama’s nuclear security agenda. Sequoia also represents continued American leadership in high performance computing, key to the technology innovation that drives high-quality jobs and economic prosperity.” 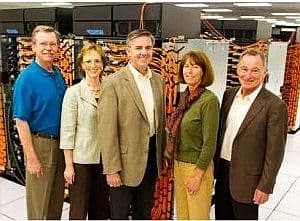 The IBM team behind Sequoia, declared as the world’s fastest computer for 2012. Courtesy LLNL.gov/IBM

Sequoia will provide a more complete understanding of weapons performance, notably hydrodynamics and properties of materials at extreme pressures and temperatures. In particular, the system will enable suites of highly resolved uncertainty quantification calculations to support the effort to extend the life of aging weapons systems; what we call a life extension program (LEP),” said Bob Meisner, NNSA director of the ASC program.

Uncertainty quantification, or “UQ,” is the quantitative characterization and reduction of uncertainty in computer applications through running very large suites of calculations to characterize the effects of minor differences in the systems. Sources of uncertainty are rife in the natural sciences and engineering.

The machine will be an important tool used to support stockpile life extension programs, including the B61 and the W78.

By reducing the time required for these studies, total costs are also reduced.In addition, the machine is expected to enhance NNSA’s ability to sustain the stockpile by resolving any significant findings in weapons systems, bringing greater power to the annual assessment of the stockpile, and anticipating and avoiding future problems that inevitably result from aging.

All of this helps to ensure that the nation will never have to return to nuclear explosive testing.

Supercomputers such as Sequoia have allowed the U.S. to have confidence in its nuclear weapons stockpile over the 20 years since nuclear testing ended in 1992.

The insight that comes from supercomputing simulations is also vital to addressing nonproliferation and counterterrorism issues as well as informing other national security decisions such as nuclear weapon policy and treaty agreements.

“Sequoia is an exciting achievement for the POWER architecture, not just for its speed and energy efficiency, but also for the important and complex work it can support to safeguard the nation’s nuclear stockpile,”said Colin Parris, General Manager IBM Power Systems. “With supercomputers capable of 16 sustained petaflops, our ability to affect strategic change in areas like life sciences, public safety, energy and transportation that make our world smarter is greater than ever. The improvements in affordability, performance, efficiency and size that Sequoia delivers will also enable a broader set of commercial customers to implement HPC for their competitive advantage.”

Though orders of magnitude more powerful than such predecessor systems as ASC Purple and Blue Gene/L, Sequoia will be roughly 90 times more power efficient than Purple and about eight times more than BG/L relative to the peak speeds of these systems.

These videos explain a little more about how NNSA uses supercomputers to maintain the nation’s nuclear weapons stockpile without the need for underground testing: