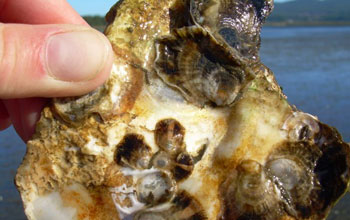 Oysters at hatcheries in Oregon are showing the effects of ocean acidification. Courtesy/OSU 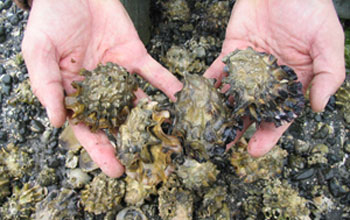 For the past several years, it has struggled with significant losses due to ocean acidification. Oyster larvae have had mortality rates high enough to render production no longer economically feasible.

Now a new study documents why oysters appear so sensitive to increasing acidity, but also offers some hope for the future.

“The failure of oyster seed production in Northwest Pacific coastal waters is one of the most graphic examples of ocean acidification effects on important commercial shellfish,” said Dave Garrison, program director in the National Science Foundation’s (NSF) Division of Ocean Sciences.

NSF funded the study through its Ocean Acidification Program, part of NSF’s Science, Engineering and Education for Sustainability programs.

“This research is among the first to identify the links among organism physiology, ocean carbonate chemistry and oyster seed mortality,” said Garrison.

Results of the study are online in the journal Geophysical Research Letters, published by the American Geophysical Union.

“From the time eggs are fertilized, Pacific oyster larvae precipitate roughly 90 percent of their body weight as a calcium carbonate shell within 48 hours,” said George Waldbusser, an Oregon State University marine ecologist and lead author of the paper.

“Young oysters rely solely on the energy they derive from the egg because they have not yet developed feeding organs.”

During exposure to increasing carbon dioxide in acidified water, however, it becomes more energetically expensive for organisms like oysters to build shells.

Adult oysters and other bivalves may grow more slowly when exposed to rising carbon dioxide levels. But larvae in the first two days of life do not have the luxury of delayed growth.

“They must build their first shell quickly on a limited amount of energy–and along with the shell comes the organ to capture external food,” said Waldbusser.

“It becomes a death race of sorts. Can the oyster build its shell quickly enough to allow its feeding mechanism to develop before it runs out of energy from the egg?”

The results are important, marine scientists say, because they document for the first time the links among shell formation rate, available energy, and sensitivity to acidification.

The researchers say that the faster the rate of shell formation, the more energy is needed. Oyster embryos building their first shells need “to make a lot of shell on short order,” said Waldbusser.

“As the carbon dioxide in seawater increases, but before waters become corrosive, calcium carbonate precipitation requires more energy to maintain higher rates of shell formation during this early stage.”

The researchers worked with Whiskey Creek Shellfish Hatchery in Netarts Bay, Ore. They found that on the second day of life, 100 percent of the larval tissue growth was from egg-derived carbon.

“The oyster larvae were still relying on egg-derived energy until they were 11 days old,” said Elizabeth Brunner of Oregon State University and a co-author of the paper.

The earliest shell material in the larvae contained the greatest amount of carbon from the surrounding waters.

Increasing amounts of carbon from respiration were incorporated into shells after the first 48 hours, indicating an ability to isolate and control the shell surfaces where calcium carbonate is being deposited.

Waldbusser notes that adult bivalves are well-adapted to growing shell in conditions that are more acidified, and have evolved several mechanisms to do so.

These include use of organic molecules to organize and facilitate the formation of calcium carbonate, pumps that remove acid from the calcifying fluids, and outer shell coatings that protect minerals to some degree from surrounding waters.

Waldbusser said that the results help explain previous findings at the Whiskey Creek Hatchery of larval sensitivity to waters that are high in carbon dioxide but not corrosive to calcium carbonate.

The discovery may be good news, scientists say, because there are interventions that can be done at hatcheries that may offset some of the effects of ocean acidification.

Some hatcheries have begun “buffering” water for larvae–essentially adding antacids to incoming waters–including the Whiskey Creek Hatchery and the Taylor Shellfish Farms in Washington.

The study provides a scientific foundation for the target level of buffering.

“You can make sure that eggs have more energy before they enter the larval stage,” said Waldbusser, “so a well-balanced adult diet may help larval oysters cope better with the stress of acidified water.”