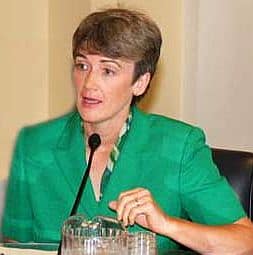 With Sen. Jeff Bingaman’s upcoming retirement, New Mexico will have gone from having two senior members of the U.S. Senate to having none in a short time span. Democratic Sen. Tom Udall is midway through his first term after serving two decades in the House.

Heather Wilson brings similar experience into her bid for the Republican nomination to seek Bingaman’s seat in the November election. She previously spent 10 years as a strong representative for New Mexico in the House.

A graduate of the Air Force Academy and former National Security Council staffer, Wilson is aptly suited to reclaim her role as a player on defense and national security — two areas of great importance to a state that plays host to military bases and national laboratories, and shares a border with Mexico.

But Wilson says her biggest concern and top priority will be getting the nation’s financial house in order. She says spending is lavish and government has grown at a record clip under the current administration. She contends a harsh regulatory environment and overly complex tax code make it hard for investors to invest and bankers to lend, so economic growth and job creation remain unnecessarily stymied.

Wilson’s reputation as a thoughtful representative, not a lock-step partisan, has not always helped her politically. But the nation is in need of people who can reach across the aisle and actually work.

The Journal recommends that Republican voters choose Heather Wilson in the June 5 primary.

In the Republican primary race for U.S. Senate, the Sun-News endorses Heather Wilson.

Wilson, a former six-term member of New Mexico’s First District, is making her second run for the U.S. Senate. She was defeated by Steve Pearce in the 2008 primary. (Pearce went on to lose to Udall in the general election.)

Challenger Greg Sowards, who owns a Las Cruces-based child care business, is running for national office for the third time. He lost in the GOP primary seeking Joe Skeen’s seat in 1996 and to Ed Tinsley in the GOP primary for the same seat in 2008. He said this will be his last run.

Sowards has described Wilson as a “big spending, socially liberal, career politician,” and has suggested that any compromise Wilson agreed to over the years is betrayal. We disagree.

Wilson, a one-time protégé of Domenici, has been a budget hawk throughout her career. A graduate of both Oxford University in England, where she earned master’s and doctoral degrees in international relations, and of the U.S. Air Force Academy, Wilson has routinely advocated for cuts in taxes and spending while maintaining a strong military.

Voters will have clear and stark distinctions in November, whether Wilson runs against Heinrich or Balderas.

Along with serving in Congress, Wilson also served as secretary of the state’s Children, Youth and Families Department and in international positions for the White House and NATO. Her vast breadth of experience, from local child welfare issues to international arms control, make her well prepared to serve as a U.S. senator.