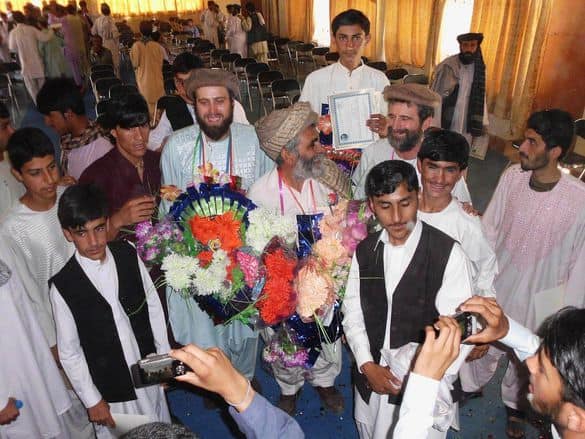 The main purpose of our Afghanistan trip last month was to visit the graduation ceremonies for Green Village Schools’ Advanced Education Center (GVS-AEC) in Lashkar Gah, the capital of Helmand Province.

My organization (the Afghan Sister Village Project) and Blake’s organization (Project PeacePal founded by Sarah Wilkinson of Albuquerque) acted as support players for Green Village Schools, the organization that runs the GVS-AEC in Afghanistan.

In addition to attending their regular schools, students came to GVS-AEC to study English and computer/internet technology.

Part of the program was to correspond with students from Los Alamos High School, through letter writing and Internet forum discussions. 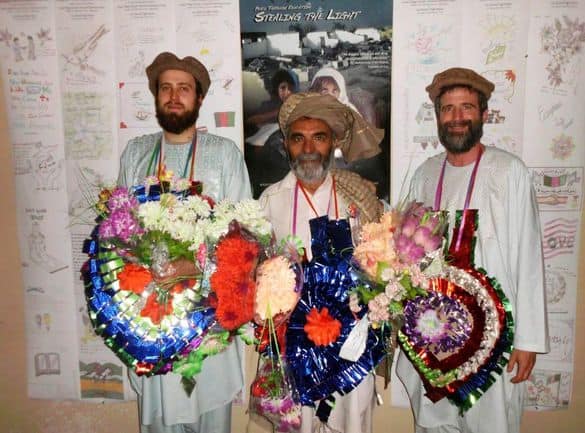 From left, Blake Batten, Dr. Mohammad Khan Kharoti and Dr. Bob Fuselier posing in front of scrolls made of letters exchanged between the GVSAEC students in those at Los Alamos High School. The “awards” around their necks were given to them by the graduating students. The center poster is from a documentary made of Kharoti’s work in Shin Kalay. Courtesy photo

GVS was founded by Dr. Mohammad Khan Kharoti, an Afghan-American physician now from Portland, Ore. A brief history of his amazing life’s story can be found at www.greenvillgeschools.org.

Of importance to this story is that he was able to start a school for boys and girls in his hometown of Shin Kalay in 2001 prior to 9/11.

Shin Kalay is a village about 15 or so miles from Lashkar Gah.

Although that school was torn down by militants in 2008, many students found ways to continue their education and some attended and graduated from GVS-AEC.

The graduation ceremonies were held at a girls’ school in Lashkar Gah on separate days for males and females.

Of the 230 graduating students, 40 were local educators who attended GVS-AEC to improve their teaching abilities.

The girls’ ceremony was held first, on Thursday afternoon during the heat of the desert day. It was very formal, with numerous local dignitaries present.

Until we were introduced, everyone thought we were Afghan officials. 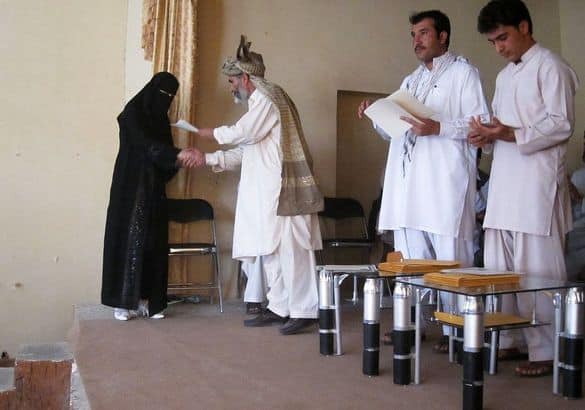 Since this was our first public appearance in Lashkar Gah and the event was a girls’ graduation, Blake and I felt some unease.

Although the AEC was supported locally, we were very aware that some conservative Afghan traditions frown upon public interactions between unrelated men and women.

We were more than happy to fade into the background and let this be a celebration for these young Afghan women. 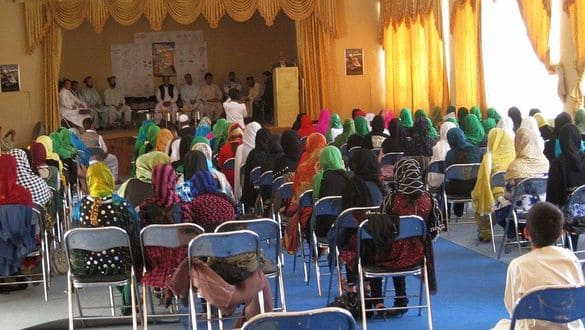 Unfortunately, that was not to be. The ceremony began with speeches from teachers and dignitaries, some with parts in English.

Several of the students gave brief talks in English as well, mostly expressing their thanks for this unique opportunity.

The certificates and awards were then presented, with all of the dignitaries being asked to participate.

Whether due to the exuberance of the teachers running the ceremonies or a desire not to offend us, Blake and I were asked to hand out some of the graduation certificates.

We accepted the invitation as an honor, but with a bit of concern since numerous photos were being taken.

One question ran through my mind: How do I show these brave young women respect without offending someone else?

In the seconds before the first student arrived from the audience to receive her certificate from me, I had to decide a course of action.

Many of the non-teacher dignitaries handed the certificates with only their right hands without looking at the students.

In Afghan culture, subtle differences in gestures carry a lot of meaning. I had noticed the day before one of the GVS-AEC’s teachers handing Dr. Kharoti an envelope with two hands.

I learned later this gesture was one of respect. In the seconds before the first student arrived on stage, a plan came to mind: I would hand out the certificate with both hands, look at the student’s hands to make sure there was no missed hand off and to avoid appearing that I was staring at the girl, and say congratulations in English.

If the student made eye contact or extended her hand, I would return either gesture.

This seemed to work well. After the ceremony, Blake and I made ourselves available for those students who wished to practice their English.

Many did, and their joy of their accomplishments and our brief discussions diminished my feeling of unease.

Some students felt comfortable enough to request we do all we could to keep the AEC open.

But I remained cautious as we posed for numerous photos with the young graduates, consciously keeping a clear separation between me and the students.

I found it hard to dismiss the thought of some extremist altering one of the photos to make it appear I was acting inappropriately.

It’s troubling to think that such a joyous occasion brought about so many concerns, but that’s how it is today in many areas of Afghanistan. 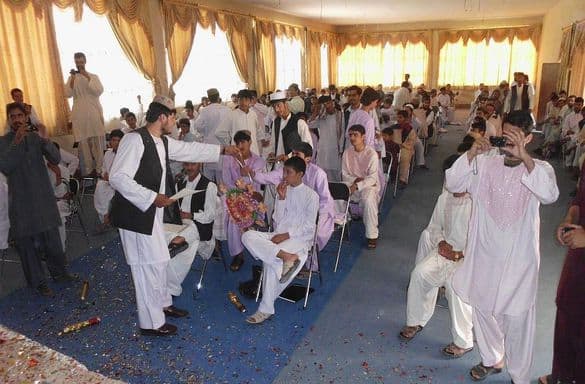 The boys’ graduation the following morning was a different story. For starters, boys are expected to be more outgoing.

Physical contact is welcomed. Hugs and hand holding are commonplace. The ceremony on stage was almost identical to that of the girls, but the atmosphere was one of open celebration.

Decorative placards were presented by students to students as they received their graduation cerificates, hugs and handshakes were given, and confetti was shot into the air – all happening in front of the stage as the ceremony crept on.

Conversations afterwards were more relaxed and personal. Like their female counterparts, many asked us to find ways to keep the AEC open.

Photos were taken and retaken to include various combinations of friends. Eventually, Dr. Kharoti came to our rescue by announcing we had to go.

Although the inability of a major donor to continue to finance the GVS-AEC has cast a shadow over the graduation celebrations, numerous personal success stories continue to bring hope.

Before Dr. Kharoti built the first school in Shin Kalay 11 years ago, not a single woman from his home village (pop. over 10,000 people) could read or write.

Three of the GVS-AEC women graduates, who had attended the school in Shin Kalay as children, began medical school the week we were visiting.

When they graduate, they plan to return to Shin Kalay to practice as the area’s first women doctors.

The GVS-AEC’s success has extended beyond its student graduates.

The two English teachers, who received TESOL accreditation (Teaching English to Speakers of Other Languages) as part of the program, had hoped to continue teaching at the GVS-AEC.

When the lack of secure funding forced them to look elsewhere for employment, their TESOL training helped them obtain positions that would have otherwise been unavailable to them, including at the university level.

The reach of AEC’s success followed us to the airport the next day. The young man checking us in at the ticket desk was a graduate of the AEC.

In the waiting area, we met the proud and thankful fathers of two of the young women graduates.

This might not be unusual for a small town such as Los Alamos where I live, but we were in the provincial capital, a city with a population approaching a million.