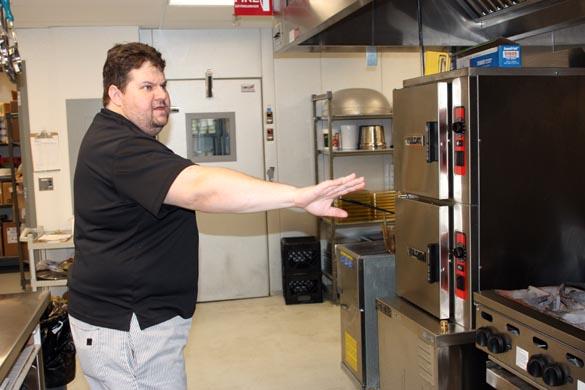 That saying, the way to a person’s heart is through their stomach, is certainly true. For instance, the meal program at the White Rock Senior Center is important to many of its diners. Not only does the program provide many seniors with their sole meal for the day but it gives them an opportunity to socialize and connect with friends.

Los Alamos Retired Senior Organization Executive Director Linda Boncella said many seniors live alone so it is particularly good news that the White Rock Senior Center was recently appropriated $90,600 from the Aging and Long Term Services Department in New Mexico to make improvements to its kitchen.

White Rock Senior Center Chef Michael Mason said the new equipment includes a cook and hold oven, which will allow him to slow roast meats overnight and keep foods at a contained temperature so delivered meals will stay warm.

Another new addition will be a washer and dryer. Currently, Mason takes the linens to his home to be washed.

The kitchen also is receiving a grill, two garbage disposals, a prep table and a steam table. Huebner said if there are funds available new chairs will be purchased. Right now, the dining area has fabric covered chairs, which makes them hard to clean. The hope is to purchase vinyl covered chairs.

Huebner added that some minor work on the gas line and electricity will need to be done.

Mason said he is thrilled to receive this new equipment. He said the garbage disposals “will be a life saver for us.”

He said getting the addition of the prep tables will allow for more workspace.

“I’m getting the work space I absolutely need,” Mason said. “It’s going to allow me to better utilize my time and my space.”

To make these improvements, the kitchen will be closed for two weeks. Huebner said they expect the work to take place in late February. During this time, White Rock home delivered meals will be prepared in Los Alamos. This isn’t the only upgrade the senior center in White Rock has received.

In February 2017, the County celebrated the reopening of the newly renovated center, which included the new commercial kitchen. Although the kitchen is only two years old, it gets a lot of use. Mason said they serve about 17-18 meals a day.

Once a month, he will plan a really big lunch for a special occasion. For instance, a speaker will regularly talk about the trips they have made around the world and Mason will design the lunch menu to reflect that featured country’s cuisine. He has prepared foods native to New Guinea, Ireland, Australia and Turkey.

Getting a meal at the center is invaluable to the seniors, Boncella said.

“Many seniors live alone,” she said, adding that when you live alone cooking can become a chore. The center provides these individuals with a nice meal that serves as the large meal of the day.

“You don’t know how many seniors tell me this is their only meal of the day,” he said.

There is a social aspect as well, Boncella said.

“It’s very social; I think that’s so important,” she said.

People will go to the center and reconnect with old friends or past colleagues, Boncella said.

“A lot of them love the social aspect and the food is really good,” she said.

Mason, who has worked for LARSO for 15 years, has two people helping him: Aliki Benjamin who works in the kitchen and Frank Marshall who delivers meals in White Rock. Mason is a culinary trained chef but said he really enjoys working for the senior center.

“One of the things that made me appreciate the job was that they allowed me the freedom to do special meals,” Mason said.

This allows him to experiment and utilize his education, he said. Mason added that he enjoys having set hours, which he wouldn’t get in a conventional restaurant.

Plus, he loves his customers.

“I just fell in love with my seniors. They’re amazing people,” Mason said.

The cost for the lunch is $10 for anyone not a senior. For seniors, people who are 60 and older, there is a suggested donation of $5. People can request a reservation for lunch by calling 505.672.9544.

The Los Alamos community senior centers, the Betty Ehart Senior Center and the White Rock Senior Center, are operated by the nonprofit LARSO in County-owned buildings.