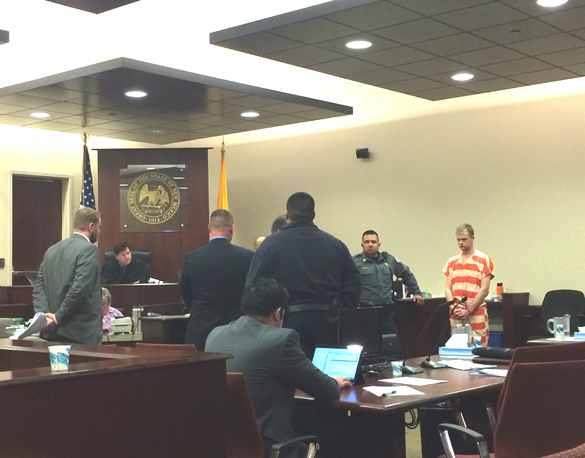 SANTA FE —  A 21-year-old White Rock man was sentenced this week in the First Judicial District Court in Santa for trafficking of a controlled substance. Anthony Dakota Lambson was arrested in June 2016 after allegedly supplying heroin to two minors, one whom was reportedly transported to Los Alamos Medical Center June 19, 2016, because of an overdose.

Judge T. Glenn Ellington handed down a 15-year sentence to Lambson but 13.5 years were suspended, credit of nine months was given for time served and he must serve another nine months in the Los Alamos County Detention Center followed by 13 to 15 months in the Teen Challenge program.

Los Alamos Police Department incident reports indicate that Lambson was initially taken into custody when police found a container of heroin. In the reports both minors stated that over a four-month period, Lambson gave them pills and later “put drugs in their arms”. The reports indicate that he would “make them save money and then they would buy the drugs from him”. He allegedly told them that “he would hurt himself if anybody ever found out”. Originally, Lambson was charged with contributing to the delinquency of a minor but following interviews with victims in the case, he was charged with child abuse and trafficking of a controlled substance.

Deputy District Attorney Kent Wahlquist told the court this case had come “very close to being a potential homicide case”. He said Lambson had no significant criminal history, which was why he was eligible for conditional discharge, but that it was because of the severity of the crime he was arguing for prison time. Police reports indicate one victim’s medical records for June 19, 2016, showed she was “positive for opiates and cocaine” and had lung bruising due to cardiopulmonary arrest”.

“Everyone seems to agree that the defendant needs treatment. What I’m not agreeing to is where he needs to get that treatment. I think he needs to face both treatment and punishment for what he did to those (minors) who are off in different inpatient treatment facilities because of what the defendant did to them,” Wahlquist said.  He also said he did not think outpatient care would do the trick and that Lambson definitely needed inpatient care.

Recommending six years in prison for Lambson, Wahlquist said, “Had this been a homicide case, I believe this is the minimum he would have been facing had medical personnel not saved (the victim’s) life. At the very minimum he should do two years so that he could take advantage of the therapy, but I’m asking for six”.

Lambson’s attorney Tyr Lorangeragreed that the charges “are severe” and asked the court to take a step back noting that the defendant is only 21-years old, has no criminal history or affiliation whatsoever, and that during the time he had already been incarcerated he had already made “substantial progress”, doing community service and working at the detention under minimum supervision.

“I don’t think prison is appropriate under the circumstances. His crimes are not violent. He also needs help; he’s willing to turn his life around – he’s expressed this to me a number of times,” Loranger said. “I think that he should be given a chance at rehabilitation before being sent to prison.”

Loranger also mentioned Lambson’s “cooperation in relation to the tragic circumstances”.  “He called the police when he saw there was an overdose, he reported the situation to emergency personnel. If he had not done that, there is a strong possibility that we would be looking at a fatality in this case”, he said.

“This is not a traditional trafficking case where we have an individual on the street making a living from his trafficking of narcotics. Obviously, Mr. Lambson has a horrible addiction and unfortunately because of his developmental delay issues, I don’t think he appreciated the gravity of providing (the minors) with drugs,” Loranger said.

Loranger proposed sending Lambson to Teen Challenge, a 13-to 15-month Christian based program in Arizona, which “addresses drug and alcohol dependence and trains participants to become productive members of society”. He told the judge that if the court was “interested in punishment”, Lambson has already been in jail for close to nine months.

“I think that should suffice for the punitive interest of the community and once again I would encourage the court to allow him a conditional discharge and place him on probation,” Loranger said.

The court then heard statements from two addiction recovery specialists from a Los Alamos church and from Lambson’s mother.

Asked by Judge Ellington if he wished to make a statement, Lambson expressed sincere regret for his actions, saying his apology came from his heart and was the result of reflection on his past.

“My regret is not that I got caught because I do honestly believe that it is the best thing that has happened to me, but I am so sorry for the decisions I have made that have led me here,” Lambson said. He went on to apologize to his family, to the victims, the courts, and the community “for the discomfort I have caused and the tax dollars that have been spent on me”.

Judge Ellington asked him about his experience at Los Lunas in the Receiving and Diagnostic Center of the Department of Corrections. Lambson said he saw the prison system and the people there and saw behavior he really doesn’t “want to be around or pick up on”.  Ellington told Lambson he had sent him to Los Lunas for a number of reasons. “One was to give you a chance to look at the rest of your life,” he said. He added that some people thrive in a prison setting but that he believed Lambson’s experience would be “horrible”.