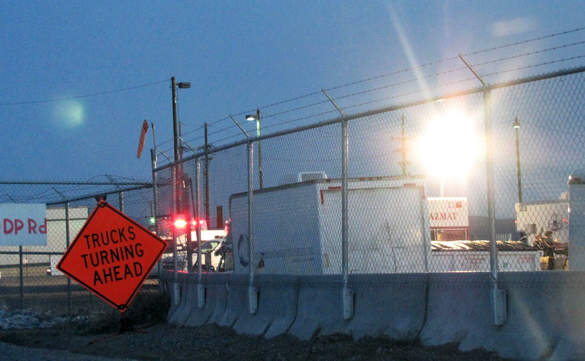 HazMat and other emergency responders worked near this section of TA-21 at the east end of DP Road Wednesday after a small chemical reaction occurred during cleanup activities. Photo by Carol A. Clark/ladailypost.com

At about 7:30 p.m. Wednesday, Los Alamos police and firefighters left the scene of a HazMat incident that began just before noon at the east end of DP Road.

A small chemical reaction in a bottle containing liquid drawn from a 60-year-old cylinder at Los Alamos National Laboratory’s Technical Area 21 caused Laboratory officials to call in hazardous material personnel, according to a LANL news release.

When a Laboratory worker took a sample of the gas inside the bottle of liquid, a chemical reaction occurred that caused the material to flare briefly.

As part of these procedures, Los Alamos County fire, environmental and law enforcement officials were contacted.

Los Alamos police closed off DP Road to traffic, reopening all but the section closest to the Laboratory’s Technical Area 21 by about 2 p.m.

The work was being done inside Enclosure 12, a sturdy metal enclosure about 200 feet long, resembling an airplane hangar.

The structure is equipped with a high-efficiency particulate air (HEPA) and activated carbon filtration system, which means any vapors from Laboratory operations are captured and processed through the filtration system.

The sampling activity entailed a Laboratory subcontractor’s emptying cylinders that were excavated last year from a World War II-era landfill known as Material Disposal Area B.

The cylinders are about the size of a fire extinguisher.

This sampling process involves removing the cylinder’s contents prior to disposing of the cylinders.

The contents of one cylinder had been drained into three, one-liter plastic bottles.

This is the normal operating process, and allows for vapor samples to be drawn to ensure that no hazardous constituents are present prior to disposition of the cylinder contents. 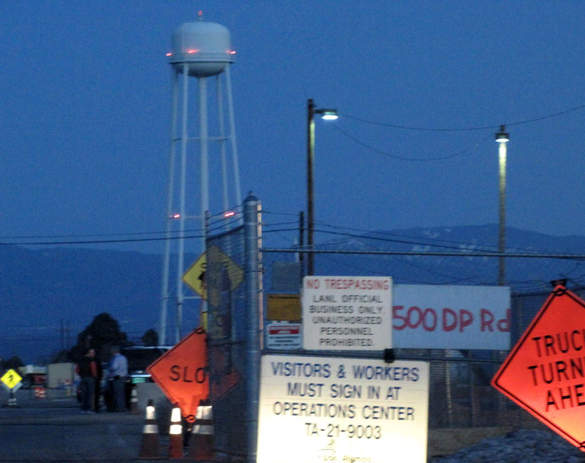 Workers were given the “all clear” at about 7:30 p.m. following Wednesday’s HazMat incident at TA-21. Photo by Carol A. Clark/ladailypost.com

The reaction occurred during Wednesday’s gas sampling activity, and caused a plastic sampling bag to burst and the contents to ignite briefly when they were exposed to air.

Laboratory HazMat personnel entered the structure and validated that no radiological or significant chemical hazards were present.

Air sampling inside the enclosure indicated very low levels of volatile organic compounds in the immediate area of the containers.

No readings of any hazardous constituents were detected outside of the enclosure.

The workers conducting the sampling activity were wearing protective clothing and equipped with supplied air, which provided protection against any potential chemical contamination.

The situation has been categorized as a “non-emergency significant event” by the Laboratory.