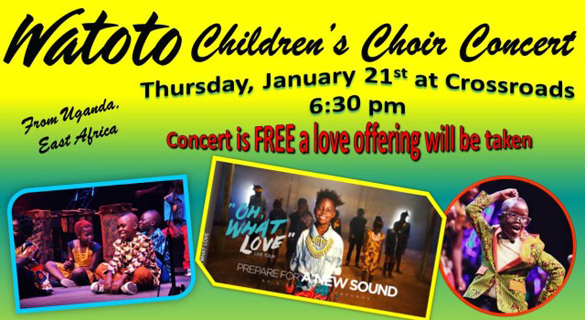 The group’s tour began in Norway in September of 2015 and traveled around Scandinavia for three months, before arriving in Phoenix, Ariz., Dec. 6, where they began a four month tour visiting several states throughout the West Costal region of the U.S.

Through this dynamic worship experience, the members of the Watoto Children’s Choir, who were once orphans, share their journeys to redemption and demonstrate that God desires to be a loving father to all mankind. All performances are free and open to the public.

Since 1994, Watoto Children’s Choirs have traveled all over the world sharing the plight of Africa’s orphaned children. Each child in the choir has suffered the loss of one or both of their parents but they have been rescued and now live in a Watoto village. Watoto is a holistic child-care solution initiated to serve the dire needs of Africa and her people.

“After losing my parents I felt alone, with no one to love me. Now I know that God is my father. He loves and cares for me. As I travel on the choir, I am going to show ople that God loves them too,” says six-year-old Jackie Nakku.

The production is indicative of emerging, modern Africa – a continent coming out of ruin and exploring its true identity. Africa is coming of age and so are her people. Her children and young adults are the key to the future.

“Oh, What Love” has brought out the unique God-given talents of young Africans to express the hope and massive hearts of worship. Almost 20 local Ugandan songwriters have contributed to crafting songs that share the stories of the orphan child and God’s love through worship.

Gary Skinner, Watoto Founder says, “God’s heart for the marginalized is not just to see individuals rescued, but rather to see them thrive as their lives are transformed. The stories of the children are real and represent thousands who are experiencing this transformation.”

Based on the Bible verse 1 John 3:1- “See what kind of love the father has given us, that we should be called children of God, and so we are”- “Oh What Love” provides a unique worship experience that celebrates the urban African landscape and brings out the individual talents and charisma of the children.

“Through their unique personalities, the children now communicate and share the sense of belonging they found in God their father,” says James Skinner, Creative Director of the Watoto Children’s Choir.

“What an extraordinary experience it is to host the Watoto Children’s Choir. I mean it lights up the place to see these beautiful kids, and when you hear their story, you think of all God has done – where they have come from, to the transformation that has happened in their lives. I would strongly recommend that you welcome the choir. They’re only going to bless you and the people will love it,” Brian Houston, Senior Pastor: Hillsong Church.

In 1994, Watoto Church founded Watoto Child Care Ministry, Inc, an international holistic care program that was initiated as a response to the overwhelming number of orphaned and vulnerable children and women in Uganda. It is positioned to rescue an individual, raise each one as a leader in their chosen sphere of life so that they in turn will rebuild their nation.

Watoto Children’s Choir – since 1994, the Watoto Children’s Choirs have toured the world annually as advocates for the 18 million African children currently orphaned by AIDS. ‘Concerts of Hope’ are held in churches, community halls, schools and other venues globally. The choirs have performed before Presidents and Royalty in the White House, Buckingham Palace and many other National Parliaments. The choir also performed at the Queen’s Diamond Jubilee Pageant in the UK. Audiences are inspired as the children sing, dance and celebrate their story of hope.