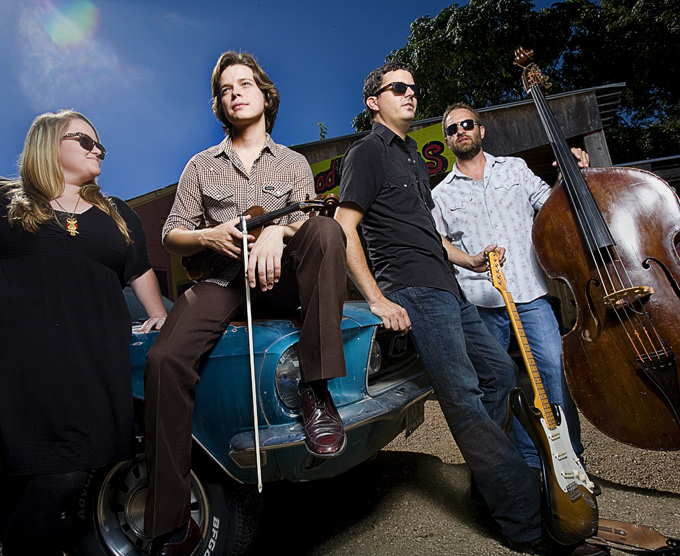 A busy weekend is coming up for the Summer Concert Series,  starting with the Warren Hood Band playing at the corner of Central and Main St., Friday, June 7.

The stage will be in from of  the Post Office for CB Fox, Dixie Girl and Los Alamos Chamber of Commerce Night.

Warren Hood is the original fiddler/violinist and founding member of the South Austin Jug Band. He came out here the first time in 2002 with the SAJB on their way to the Telluride Bluegrass Festival. They put on a great show here, made a lot of fans and then drove up to Telluride and won “Best New Band” that year. The guys still talk about one of the best weekends of their lives.

Hood graduated from high school in 2002 and was off to the Berklee School of Music in Boston. He won the top honor award at Berklee, “The String Achievement Award,” and after graduation, headed back to the “live music capitol of the world, Austin, Tex., and started his career.

Since college, Hood’s regular gigs have been with the roots-rock band, the Waybacks out of San Francisco and the very popular rock band, the Bodeans. Hood is well known in the music industry as one of the best fiddle players in the world. He’s performed with such people as Lyle Lovett, Joan Osborne, Emmylou Harris, Little Feat, Elvis Costello, Susan Tedeschi and many more. Hood will play fiddle, violin, and mandolin on Friday.

On keyboards will be the granddaughter of perhaps the greatest Texas violinist of all time, the multiple Grammy Award winner, Johnny Gimble. Emily Gimble is a wonderful keyboard player and has the voice of an angel as well as being a tremendous, growling blues and jazz singer. She is fantastic. Emily has played here in Los Alamos with Hood and with the Marshall Ford Swing Band. You’ll remember her from past gigs here if you were lucky enough to catch her. Emily has played many times with her grandfather, as well as such stars as Ray Benson, Marcia Ball, Bobby Bare and Willie Nelson.

On guitar is another young Texas master, Willie Pipkin. Pipkin was the lead guitarist for the South Austin Jug Band and has also played with some of Texas’ best musicians.

The Warren Hood Band will spend this summer touring all over the country in the best clubs and festivals from Austin to Los Alamos to Los Angeles to New York City.

The show at Central & Main is presented by the sponsors of the Los Alamos Summer Concert Series. All of the shows are free and you’re advised to bring your own chairs.

For more on Warren Hood, go to www.warrenhood.com. For more on the Series, go to www.gordonssummerconcertseries.com.
At 11 a.m.Saturday, we have the very popular Los Alamos band, Eddy & the Nomads playing great rock hits from the 50s, 60s, and 70s. They’ll play the music by the kings of rock ‘n’ roll, Elvis, Bo Diddley, Chuck Berry, Buddy Holly and Jerry Lee Lewis. You’ll also hear classics made famous by Johnny Cash, the Beatles, the Stones, the Doors, Gene Vincent, and the Big Bopper plus many others.

Friday night ushers in the beginning of  ChamberFest. On Saturday, it’s the Nomads, a huge sand pile in front of CB FOX, a great car show as well as games and booths featuring the business members of the Chamber. It’s one of the top festivals in Los Alamos every year.

For more on the ChamberFest, go to www.losalamoschamber.com/chamberfest.Next week on Friday, June 14, we’ll be back at Ashley Pond with the Mississippi Delta’s, Lightnin’ Malcolm. I promise a great night of music and fun. Check out www.lightninmalcolm.net and you’ll see for yourself.

I hope to see you at the concerts.