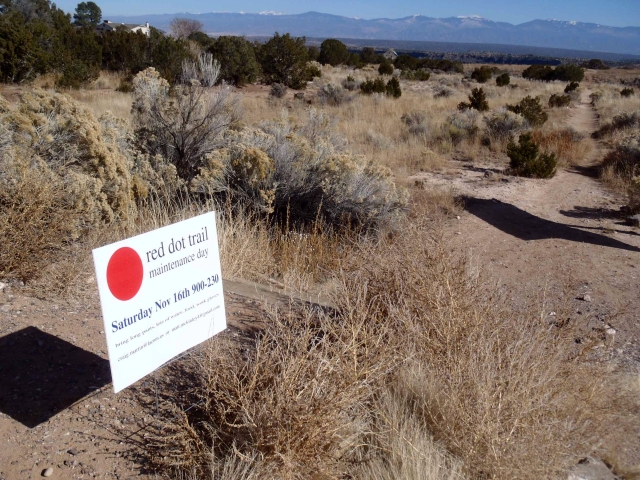 Matt McKinley posted signs around White Rock and the big red dot points the way to the trail work. Photo by Craig Martin 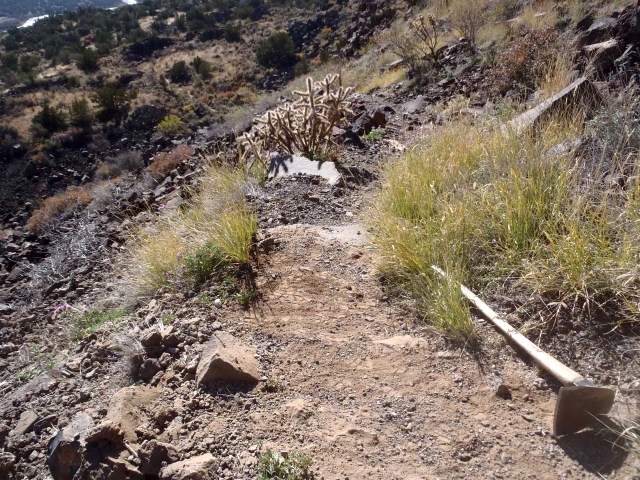 The trail in the lower half of this scene was raked with a McLeod; the trail is difficult to find in the unworked section in the upper half. Photo by Craig Martin

When I last hiked down the Red Dot Trail a few months ago I thought to myself, “Man this is rough; I really must be getting old.”

That’s true enough, but the trail could use a little loving care, too. White Rock resident Matt McKinley pointed that out to me in an email asking about the possibility of a volunteer day on the trail. I agreed to lead a group to fix up parts of the trail, but other than fixing a few ruts, I wasn’t really sure what could be done.

That was until I revisited the trail earlier this week. A good deal of the slips and trips that I had previously attributed to worn-out knees and a deteriorating sense of balance had a lot to do with the thousands of pebbles that covered the trail. Over the years, but particularly in the last several months, small rocks have covered the trail tread. Roundish rocks on smooth basalt make for rather slick footing. Every step is an adventure.

I experimented with a few different hand tools and found that for the larger pebbles, the scraper side of a fire rake, called a McLeod after its inventor, worked best. But for the smaller rocks, a whisk broom was the perfect choice. In 15 years, I’ve never done trail work with a broom.

The intent of the maintenance day is not to make the journey down the Red Dot Trail easier. It will never be an easy trip. The goal is to make it safer, easier to follow, and more attractive to hikers. There are some erosion ruts to fix, a few spots where another rock step would help, and some branches to trim back. But mostly it’s removing those little rocks.

The Saturday Nov. 16 work session begins at 9 a.m. at the Red Dot Trailhead on Piedra Loop in La Senda. Volunteers must wear long pants and sturdy shoes, and for this job, work gloves are essential. Bring plenty of water, food, sunscreen, and a hat. Tools (and brooms!) will be provided. We should be able to work down to the first large bench, about a half-mile from the trailhead, and walk out by 2:30 p.m.

The work is fairly easy, but it is White Rock Canyon so it is rugged and there is a 400-foot elevation gain on the way out. But don’t be shy, come out and help this trail, one of Los Alamos’ great hiking routes.