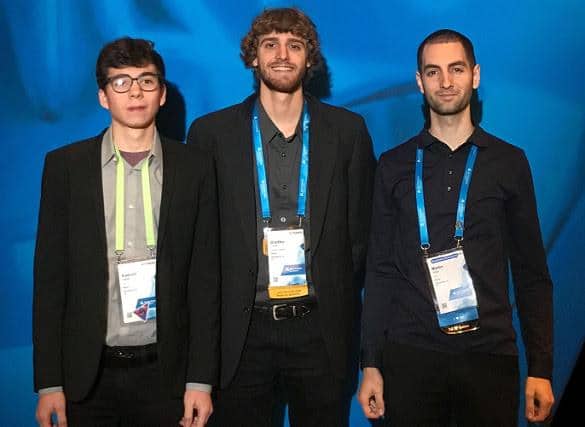 From left, Kaelum Hasler, Bradley Turner and Martin Angst represented their emerging desktop robotics company at the Autodesk Expo in November. ‘Rendyr epitomizes the potential of Virginia Tech students to change the world through launching a new venture while pursuing their degree,’ said Sean Collins, director of the Apex Center for Entrepreneurs. Rendyr seeks to democratize access to prototyping tools and could be a game changer in multiple industries, Collns said, adding that Apex ‘is proud to support this amazing group of talented students as they bring their product to market’. Courtesy/Rendyr 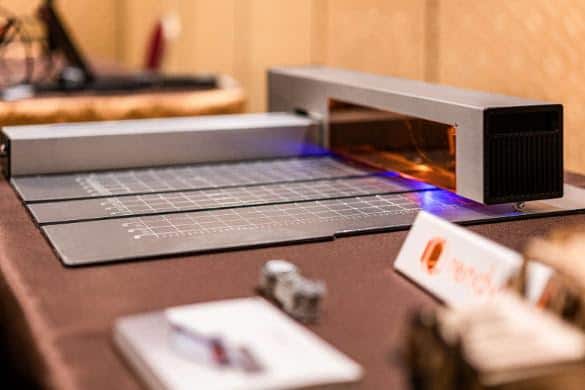 Courtesy/Rendyr
VIRGINIA TECH News:
A team of three students from the Virginia Tech College of Architecture and Urban Studies showcased their emerging desktop robotics company, Rendyr, at the recent Autodesk University Conference Student Expo in Las Vegas.
“We were one of only four student-led projects from around the world invited to present at Autodesk University,” said Martin Angst, a student working toward an architecture master’s degree. “What a great opportunity it was to be included in an event where more than 12,000 attendees came together to learn about cutting edge technologies and research.”
Angst and Kaelum Hasler, a junior majoring in industrial design, are co-founders of Rendyr. They, with Bradley Turner, also a junior in industrial design, comprise the team representing Rendyr at the expo.
Rendyr is developing a “laptop version” of an industrial laser cutter to improve access to rapid prototyping and digital fabrication. Designed to support creative environments that do not have the space or the budget to accommodate conventional fabrication machines, its portability provides convenient usage in a variety of settings and allows for easy sharing within teams or communities.
While the numbers can fluctuate from semester to semester, seven Virginia Tech students from a variety of academic disciplines, including industrial design, architecture, and engineering, are currently working at Rendyr.
Last winter, through the Venture Scholars program run by the Apex Center for Entrepreneurs, some team members attended a resident incubator at the Autodesk Technology Center in Boston where they explored more mature methods of manufacturing their machine and introduced their work to a larger community.
“Autodesk has played a major role in Rendyr’s journey,” said Sean Collins, director of the Apex Center for Entrepreneurs, the university-wide center for entrepreneurship at Virginia Tech, housed in the Pamplin College of Business.
The relationship, Collins said, evolved from an introduction by the Apex Center. “We support student-led startups by helping them build a cross-functional team; pairing them with industry contacts to validate their problem solution and product-market fit; and introducing them to Virginia Tech alumni mentors who have previously started and scaled up companies. The Rendyr team has optimized all the opportunities the Apex Center provides and is a truly exceptional group of young founders,” said Collins.
Rendyr has also utilized other programs led by the Apex Center to refine its business model, build a cross-functional team, craft a go-to market strategy, and launch the product. These include Venture Scholars, Hours with Experts, and KickStart.
Hasler’s idea for a portable laser cutter grew from personal experience. As a freshman, he found it difficult to access and use equipment like computer numerical control laser cutters and milling machines. He was also constantly on the move between design studio spaces, his dorm room, and his parents’ house.
The first prototype he created gained some support from the Institute for Creativity, Arts, and Technology. After meeting Angst, who also had a passion for robotics and digital fabrication in design, the two began sharing some ideas on prototypes, which Hasler exhibited at the International Contemporary Furniture Fair during New York Design Week with the Center for Design Research from the School of Architecture + Design at Virginia Tech in 2018.
“Feedback was overwhelmingly positive, so Martin and I got together to discuss the idea of founding a startup to bring the product to market,” Hasler said.
A second prototype won them the Virginia Tech Game Changers Challenge and helped Hasler and Angst incorporate as Rendyr Inc. in August 2018.
In 2019, Rendyr entered other competitions, including the American Evolution Innovators Cup at the Tom Tom Festival, where it won first place; the Virginia Tech Entrepreneur Challenge, where it won second place and the fan favorite award; AlphaLab Gear Hardware Cup Semi-Finals; and Danville Idea Fest.
Rendyr was also accepted into the Lighthouse Labs summer accelerator cohort in Richmond, Virginia.
Rendyr has students from various majors and colleges across the university.
“I used to think that all you needed to do something really cool was time and money. I realize now that all you really need is a good team,” Hasler said.
Travis Wiehe, a sophomore in mechanical engineering, learned about Rendyr from the Innovate Living-Learning Community and saw the team at evening Kickstart events on campus. Recently, Wiehe joined the company.
“I think the multidisciplinary aspect is important because it allows for more creative problem-solving,” Wiehe said. “I have learned that when engineers and designers work together, they can do anything.”
Local Blacksburg woodworker Grant Brewer, is one of Rendyr’s beta users. Big Secret, a Richmond design and art workshop, will receive a pre-production unit for special projects and beta testing after the students return from Autodesk University.
“Rendyr epitomizes the potential of Virginia Tech students to change the world through launching a new venture while pursuing their degree,” Collins said. “Seeking to democratize access to prototyping tools, Rendyr has the potential to be a game changer in multiple industries. Our team at the Apex Center for Entrepreneurs is proud to support this amazing group of talented students as they bring their product to market.”