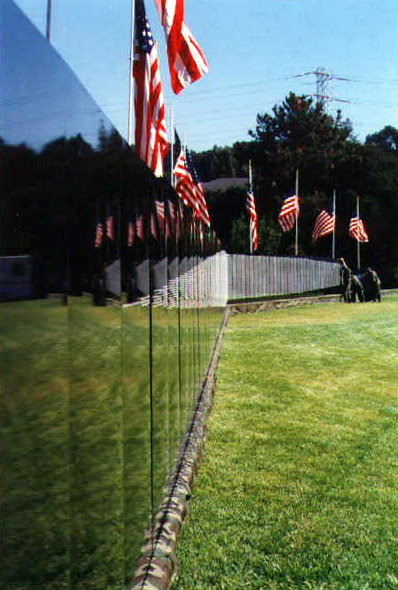 RIO RANCHO—New Mexico Department of Veterans’ Services Secretary Timothy Hale is scheduled to be among the dignitaries officially welcoming the New Mexico arrival of The Moving Wall, a traveling half-sized replica of the National Vietnam Veterans’ Memorial Wall, at a special ceremony at 10 a.m., Oct. 18 at the Rio Rancho Sports Complex, 3501 High Resort Blvd.

The Moving Wall, which arrives Thursday, Oct. 17, will be on public display 24-hours a day until 4 p.m., Oct. 21, when it will be taken down and prepared for its next stop in Camden, Tenn. There is no admission charge to view the display. But there are some restrictions and guidelines in place for those wishing to see this special monument: All mobile devices must be set to “silent,” no pets are allowed on the grounds, no smoking, no music and no unattended children.

The Moving Wall stop in New Mexico is presented in part through a collaborated effort between the city of Rio Rancho and local Vietnam War Veterans Barry Weatherby, George Reymer, Marty Cantu and Nathan Villagomez. Posting of the Colors at the ceremony will be provided by the Rio Rancho High School JRROTC. The American Legion Post 69 Color Guard also will render a 21-Gun Salute and the playing of Taps.

The Moving Wall was created by Vietnam War veteran John Devitt after attending the 1982 dedication of the National Vietnam Veterans’ Memorial Wall in Washington, D.C., the monument dedicated to the memory of the 58,000 Americans lost in the Vietnam War (including 398 from New Mexico.) Devitt vowed to somehow share the powerfully moving experience he felt in the presence of The Wall. He enlisted the help of three fellow Vietnam War veterans to build a half-size replica. The first model was finished in October of 1984. A second replica was built shortly after. The two traveling monuments now tour the country every year from April to October, spending about a week at each visited site.

For more information about the Rio Rancho stop of The Moving Wall, contact Military Order of the Purple Heart Chapter 176 Adjutant Marty Cantu at (505) 994-0204 or tunnelrat_1@q.com.

For more information about The Moving Wall, go to http://www.themovingwall.org/.