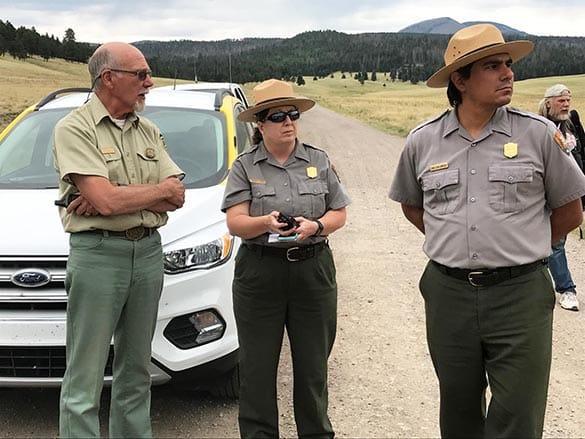 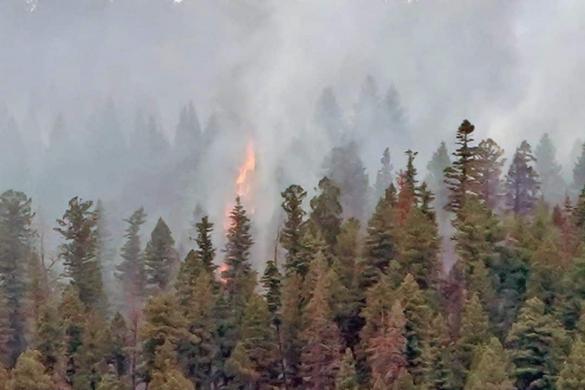 A tree burns Friday afternoon in the San Antonio Fire on the Valles Caldera National Preserve as Los Alamos Daily Post staff were escorted close to the fire area. Photo by John McHale/ladailypost.com

Valles Caldera National Preserve Superintendent Jorge Silva-Banuelos said Friday afternoon that the Preserve’s front country operations are open for the public to enjoy despite the San Antonio Fire, which has burned some 450 acres on the northwest corner since Thursday afternoon.

Silva-Banuelos, Chief of Interpretation & Education Kimberly DeVall and Santa Fe National Forest Espanola District Ranger Sandy Hurlocker escorted members of the media some 13 miles north through the Preserve and west along the San Antonio Creek to get a closeup glimpse of the fire. Firefighting resources are entering the Preserve from Forest Road 144 and approaching the fire through Sulphur Canyon so that they don’t interfere with visitors entering from NM 4 through the main entrance.

Los Alamos Daily Post staff learned during their tour through the Preserve that the Los Alamos Fire Department had just deployed Wildland Division Chief Kelly Sterna, Capt. Timothy Johnson and Capt. Micah Brittelle to the fire with LAFD’s Brush 1 truck. They join multiple ground crews, hot shot crews and engines working the fire. Friday evening a Type 3 Incident Response Team from Albuquerque was expected to take over from a team from the East Jemez Interagency Fire Center at the end of the shift.

“The fire is burning within half a mile of the boundary with the Forest Service so we’re working really closely with them. There are a lot of values on their side of the fence as well as ours and I think there’s a reasonable concern that the fire could extend outside the boundary,” Silva-Banuelos said.

He added that fire officials are trying to hold the fire back from the area and that the Incident Command Team has been asked to try and keep it south of Forest Road 144 and then west of the VC 12, the Garita Trail.

Silva-Banuelos said the Preserve has been in touch with the company that owns the natural gas pipeline that runs through the Valles Caldera on its way to Los Alamos to make them aware, but that he didn’t think the pipeline was in any danger at this point because the fire is going up the escarpment onto the bend on San Antonio Mountain.

Silva-Banuelos said the Preserve got a storm cell that came through Thursday evening but didn’t bring a lot of rain with it.

“It’s pretty typical that when things start drying out the next day you start seeing the smoke. The weather forecast is in our favor. The update today was that there has been some fire growth but not in any single direction, that it’s just growing naturally, and they are still able to do direct attack on it. It’s still zero contained but they are still actively working on it,” he said.

Silva-Banuelos said he was hoping the Preserve would not see any human-caused fire starts.

“So far so good on that, with things as dry as they are where a random lightning strike can start a fire,” he said.

He said the challenging thing with a fire like this one is that it’s in in mixed conifer spruce forest and that the way those trees regenerate is through stand replacement fire every 100 years similar to what happened in Yellowstone in the 80s.

“It’s very different to a ponderosa pine forest with large full-grown ponderosas with a lot of space in between where the fire rolls underneath and they survive, but fir and spruce go up and they all burn out at the same time. They regenerate and regrow for the next 100 years. Given the loss of those types of forests in the Las Conchas Fire and Thompson Ridge Fire, our aim is to try and save the remaining spruce and fir forests that we have the best we can,” Silva-Banuelos said.

“So, we’re looking at multiple generations of forest regeneration to get things back to the way they were. I do see a lot of hope and there’s a lot of resiliency in these forests,” Silva-Banuelos said.

He noted that at the Las Conchas Fire scar on the south rim of the Caldera the green of the aspens is coming up, which is usually the natural succession.

“In the scars from the other two fires we get questions from our hunters as well as the general public about where the elk are because people don’t see them out in the Caldera. What we’ve kind of noticed is there is more forage on the volcanic domes after the fires come through. The elk are spending a lot more time up there than down here. With these really dry temperatures and the drought conditions, we’ve been seeing the elk here in the Valles again, mostly near the river where there’s still some green grass,” Silva-Banuelos said.

Looking at the smoke from the fire, Silva-Banuelos said there are some critical values out there in the fire area including some endangered species habitat, a cabin and some weather stations they want to protect.

“The cabin is well within the perimeter, so we will have to see how it fared. The other resources – the endangered species for example, have lived in a volcanic environment for a long time so we’re hopeful they can make it just fine through the fire. Some of the other weather stations and other infrastructure we will do our best to protect it while we can, but our top priority is firefighter safety,” he said.

Silva-Banuelos acknowledged that the area has dense fuels and is very dry, but said he was optimistic.

“We’re experiencing record drought conditions here in the Valles Caldera and more broadly in the Jemez Mountains, but I think it’s just a matter of waiting for the good moisture in the weather forecast to help us get a handle on the fire,” he said. 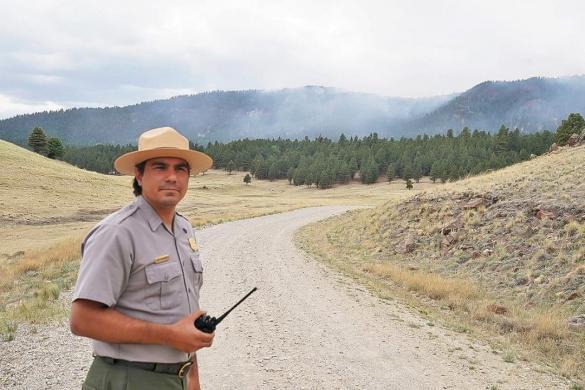 VCNP Superintendent Jorge Silva-Banuelos discusses the fire at a vista point along the road toward San Antonio Mountain. Photo by John McHale/ladailypost.com 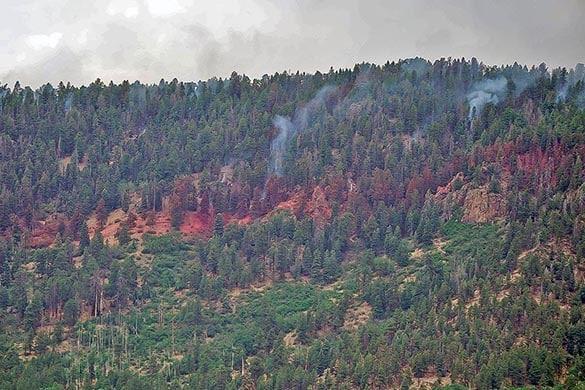 A stripe of fire retardant slows the progress of the San Antonio Fire Friday afternoon at the Valle Caldera. Photo by John McHale/ladailypost.com 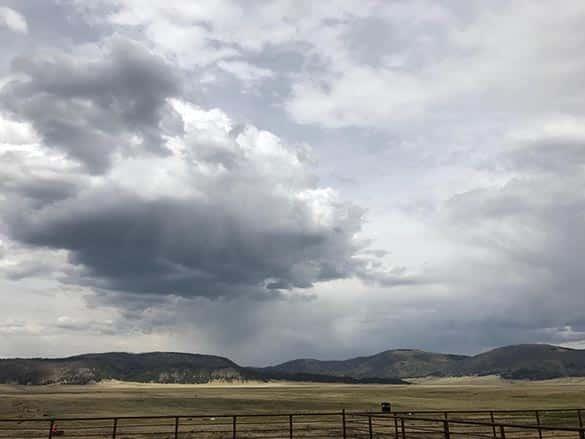 Rain clouds appear in the sky Friday afternoon over the Valles Caldera National Preserve giving fire officials hope that the San Antonio Fire can be contained. Photo by Maire O’Neill/ladailypost.com