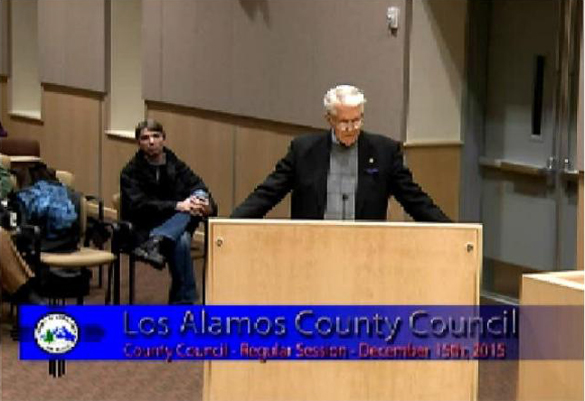 On Dec. 15, 2015, the Los Alamos County Council unanimously passed and adopted a resolution endorsing the naming of a United States Navy Submarine as the U.S.S. Los Alamos.

That was the beginning of an intensive yearlong effort by the USS Los Alamos Commissioning Committee to gather documentation from across the state substantiating the wide spread support for our effort.

In that year, memorials were passed by both houses of the State legislature, and letters of support were obtained from the Governor of New Mexico, the Secretary of the New Mexico Department of Veteran Services, Senators Pete Domenici and Jeff Bingaman, the Director of the National Park Service, the Navy League of the United States, the Los Alamos Chapter of the Military Order of the World Wars, the Santa Fe chapter of the Military Officers Association of America, the Association of Women Veterans of New Mexico, the Los Alamos Chamber of Commerce with 245 signatures on a supporting petition, former Los Alamos County Councilor Vince Chiravalle and handwritten letters from 71 Los Alamos elementary school children. Resolutions of support also were obtained from the Regional Coalition of LANL Communities, the Eight Northern Indian Pueblos Council and the American Legion.

Additionally, supporting articles have been published in the Los Alamos Daily Post, National Security Science and the Proceedings of the Naval Institute.

During this time, committee members also made contact with numerous senior officers of the U.S. Navy. 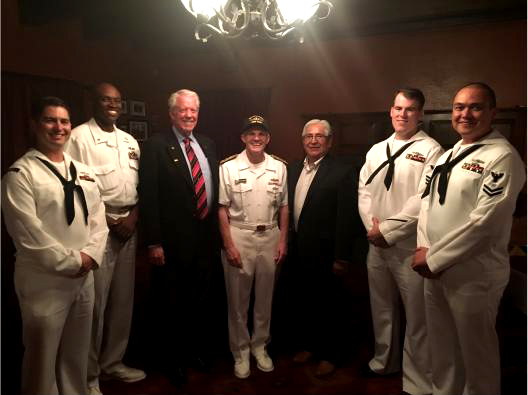 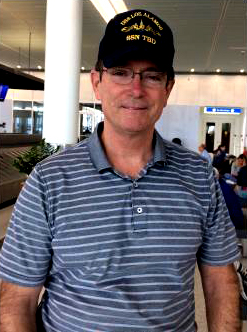 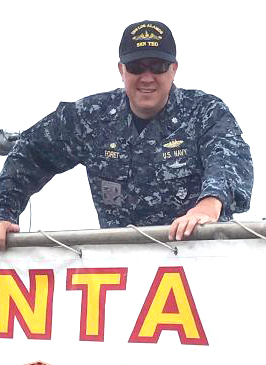 A copy of USS Los Alamos hat was even presented to Secretary of Defense Ashton Carter during his last visit to Los Alamos.

Brian D’Andrea and James Nesmith, of the USS Los Alamos Commissioning Committee, met Dec. 13, 2016, with U.S. Sen. Martin Heinrich and representatives of the Secretary of the Navy’s office to present the formal petition for a USS Los Alamos. Sen. Heinrich hosted the meeting in his DC office. 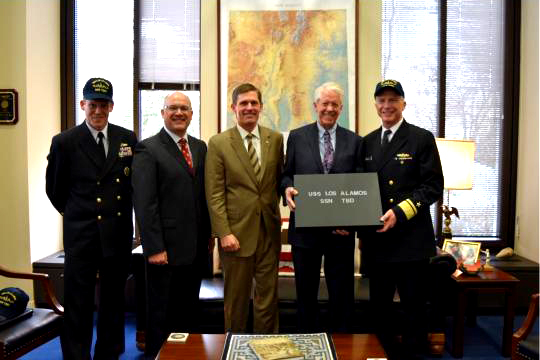 The meeting began with ADM Faller describing the naming process. The one piece of new information he provided was that the Secretary of the Navy receives 20 to 25 requests for ships names per month. He was concluding by giving a time frame of two years for the naming, which, if ours was chosen, would make it 2019. Nesmith jumped in and stated that the committee, the community and all of our supporters up to the Governor of the State of New Mexico, were hoping it could happen during the 75th Anniversary of the Laboratory and, coincidentally, the 75th anniversary of the Navy’s relationship with Los Alamos. This produced a remarkably increased level of interest from the SecNav people.

Nesmith went into some detail describing the interaction between the Navy and Los Alamos, starting with Deke Parsons and continuing to our present work with the Navy.  He further detailed the contributions of the people of Los Alamos and surrounding communities to fundamental science and the work in addressing natural disasters, such as the BP Oil Spill and the Fukushima Daichi disaster, as well as a wide array of issues of global concern, both scientific and security related.  The Navy people paid rapt attention.

ADM Faller suggested that a Sense of the Congress resolution in support of the USS Los Alamos could be of considerable help in moving the process along rapidly.  Senator Heinrich immediately volunteered to handle that.  It turns out Senator Heinrich’s father was on the USS Curtis, which was the communications ship for the fleet supporting the Enola Gay, the B-29 that carried the “gadget” to it’s target.

We cannot say when a decision will be made but certainly not before a new Secretary of the Navy is confirmed by the Senate and sworn in. We feel optimistic in that Los Alamos is iconic in the history of the United States. Our relationship with the United States Navy has existed as long as our community has existed and it has been a very productive, positive relationship. The very positive reaction of the representative of the Secretary of the Navy’s office bolstered what was already our strong confidence that we will be successful.

Obviously, we would not be where we are today without the tremendous and enthusiastic support of the people of Los Alamos and the surrounding communities. We hope that the naming will coincide with our 75th Anniversary. The celebration will be intense. We hope to be joined by crew members of the old USS Los Alamos AFDB-7, most of whom have never been in Los Alamos.

One last item. Our primary source of funding for this effort is the sale of these incredibly beautiful hats: 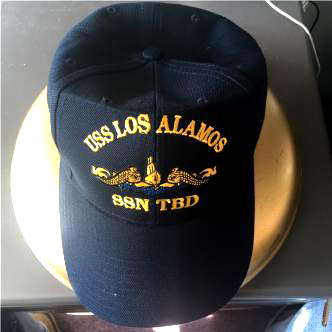 They are available from CB FOX, the VFW and the American Legion. Please support this effort  and buy hats for all of your friends and relatives.

Los Alamos, we thank you,