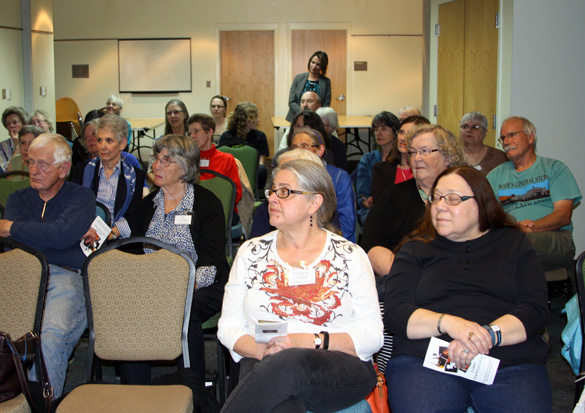 Audience members listen as experts speak on human trafficking in New Mexico Thursday. Rep. Stephanie Garcia Richard attended the talk and can be seen standing in the back of room. Photo by Bonnie J. Gordon/ladailypost
By BONNIE J. GORDON
Los Alamos Daily Post

Gagne and Lynne Sanchez of Life-Link, a Santa Fe non-profit that focuses on housing, mental health, and substance abuse issues to help get people back on their feet, were in Los Alamos Thursday to talk about human trafficking close to home. The event was hosted by the Los Alamos Chapter of the Association of University Women at Mesa Public Library.

In order to be prosecuted under the trafficking laws, a person must profit from trafficking and for adults, show coercion was used, although this is not necessary for children.

Most cases are out of Albuquerque and a surprising 95 percent involve U.S. citizens. All the cases currently being prosecuted involve women, Gagne said. These victims have been forced into the commercial sex trade. Since 2008, 21 cases have been prosecuted in New Mexico, she said.

This is the tip of the iceberg, Gagne said, “It’s a very big iceberg.” Illegal aliens forced into slavery are difficult to identify and help because of their fear of deportation, lack of English and vulnerability of family members to the traffickers, she said. There is a special visa program for trafficking victims and family members may be brought to the U.S. as well.

Although cases of sweatshop situations and other forced labor cases certainly exist, none have so far been prosecuted under the new laws, Gagne said.

There are many reasons U.S. citizens may fear to come forward as well, Gagne said. Drug dependence, fear, a romantic relationship with the trafficker and fraudulent claims by the perpetrator that the victim will be charged with a crime are some of them.

“We encourage community members to speak up about people they feel may be controlled by traffickers. An Albuquerque hairdresser called a hotline when she saw a teenage client at her salon under the control of a suspicious man. The teen got help and the man was arrested. The hotline national hotline number is 1-888-3737-888.  Life Link has a hotline for victims at 505-GETFREE. (1.505.438.3733). This number is textable.

Traffickers prey on people they perceive as vulnerable, Sanchez said. May were abused as children, have drug dependencies, suffered from domestic violence and/or are homeless, she said. The most common age of victims is between 17-23, but Life Link has seen victims from 13-42. There current caseload of trafficking victims is 11. Men can also be victims of sexual trafficking and Life Link has worked with three male clients.

“When a victim is identified by law enforcement, we work with them. For the first 72 hours we focus on mental and physical health needs,” Sanchez said. Later Life Link helps victims rebuild their self-esteem and get access to housing food and education.

Child victims face special problems because of a lack of appropriate services for them. Neither halfway houses nor juvenile detention are appropriate for them, Sanchez said.

Traffickers lure victims with promises of legal employment through advertisements, as well as approaching them in person, Gagne said. They advertise their services in such venues as Craig’s List and newspapers under the guises of legal activities like massage or escort services. Often, clients come from outside the city where the business is based and victims may even be “delivered” to clients in smaller towns, Gagne said.