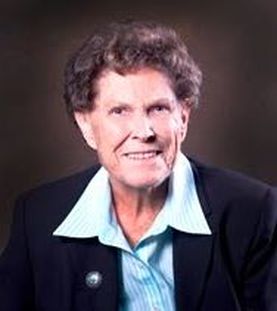 “We are just delighted to be able to honor Representative Wallace in this way,” said UNM-LA Executive Director Cedric Page during an interview Tuesday. “We’ll host a formal dedication ceremony here at the campus in late August or early September and invite the family, community leaders and the public to join us in dedicating the Lecture Hall in her name with a special plaque.”

Page suggested to his staff during discussions months ago about the Lecture Hall that it be named after Wallace and they enthusiastically agreed, he said, as did the entire UNM-LA Advisory Board. But there is a lengthy and detailed process that must be followed through the University of New Mexico main campus in Albuquerque in naming a Hall after someone, he explained.

Campus Resources Director Lisa Wismer began the paperwork process with the main campus and once approval was granted from the naming committee, she started working with Wallace’s family and local photographer Don Taylor on a design for the Jeannette O. Wallace plaque.

“I, and my family, am very proud of what my mother accomplished as a public servant and she was very dedicated to the community of Los Alamos. It is particularly pleasing that UNM-LA is recognizing Jeannette for her contributions,” Wallace’s son Terry Wallace said. “She was adamant that opportunity through education was a key element to success; it was reflected in her own life where she came from a hardscrabble background and surprised her own family by leaving home and pursuing a college degree at Arizona State University. Jeannette was proud of UNM-LA and the spectrum of opportunities it provided to the members of the community. The entire family looks forward to the dedication – it is a wonderful memorial!”

Wallace, a long time community leader, died from illness in April 2011. She was serving her 11th term as a New Mexico State Representative, which she had won at the age of 76.

She had previously served on the Los Alamos County Council and was one of the co-founders of the Leadership Los Alamos program.

At the time of her death, Gov. Susana Martinez released a statement saying, “Jeannette dedicated two decades of her life to serving New Mexico in the state legislature. She was a tireless advocate for the people of Los Alamos, Sandoval and Santa Fe counties – committed to public service even as her health was fading over the past few months. Chuck and I offer our deepest condolences to Jeannette’s family and friends, and we will keep them in our thoughts and prayers during this difficult time. Representative Wallace’s passing is a loss for all of us who have had the pleasure to work with her. She will be deeply missed.”

Heather Wilson, a former Congresswoman and currently a candidate for U.S. Senate said, “Jeannette Wallace was a dear friend and a wonderful public servant. She was an example to others of how citizens can serve the community with unfailing decency, selflessness and integrity. My thoughts and prayers are with her family and many friends. We will all miss her warmth and wisdom very much.”

Editor’s Note: UNM-LA will release specific details of the public dedication event for the Lecture Hall as the date gets closer.