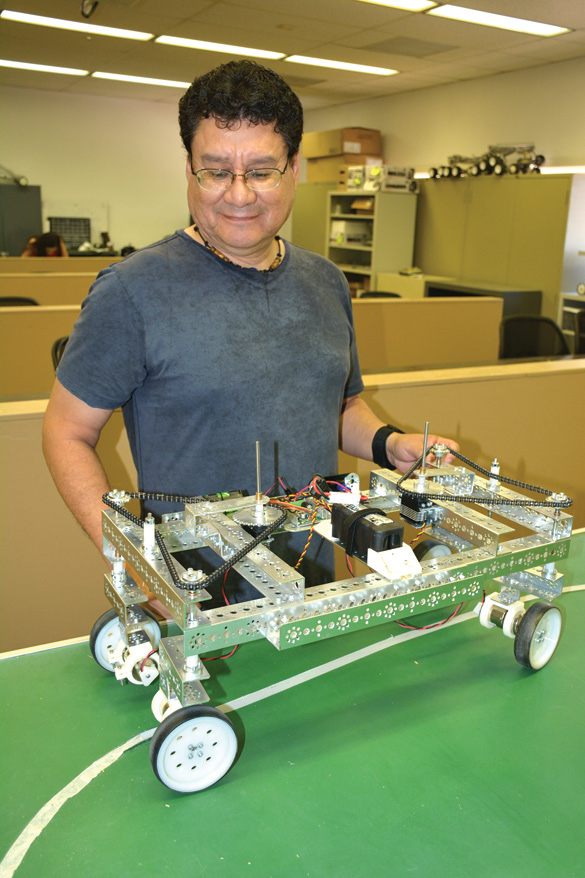 Craig One Feather examines a robot in the Robotics Lab at UNM-LA. Photo by Nancy Coombs/UNM-LA

At the UNM-Los Alamos commencement ceremony in May, Craig One Feather addressed the assembly with a moving testament to the importance of transitions.

“We will hold true to the values we have learned while attending UNM-LA, where a hard work ethic, being prepared every day and asking for help from others are qualities that will guide us further on our new journey,” One Feather said.

As a non-traditional student, One Feather is certainly embracing tremendous change. He graduated with honors with an Associate of Applied Science in Robotics. Next spring, he will transfer to New Mexico Institute of Mining and Technology in Socorro, after attending UNM-LA for one more semester.

One Feather feels UNM-Los Alamos played a critical role in his re-entry to the academic world.

After graduating Red Cloud Indian School in Oglala, S.D. in 1982, One Feather served in the Air Force, with a job in Radio Communication Analysis for military intelligence. He enjoyed a posting in Misawa, Japan for two of the four years he served.

On return to civilian life, One Feather first attended San Juan College in Farmington to study computer programming, and then transferred to Fort Lewis College. He supported himself by working in restaurants, and ultimately decided he enjoyed the freedom of cooking more than spending all his time studying, so he left college to become a chef.

In 1993, One Feather moved back to Oglala to be closer to his father who was facing health issues. One Feather started a restaurant, Prairie Winds Casino, which he managed for 10 years. After that he spent another 10 years working in the restaurant business in Hot Springs, SD.

One Feather’s sister, Sandra One Feather, has worked in Human Resources at Los Alamos National Laboratory for about 15 years and was familiar with UNM-LA. She sensed One Feather was getting restless, and she sent him a pamphlet about the UNM-LA Robotics Program.

One Feather was tired of the restaurant business, and recognized that the UNM-LA program fit his interests. Around that time, One Feather’s father, Gerald One Feather, was awarded an honorary doctoral degree by University of Colorado for his outstanding contributions to Lakota education. With strong support from his father, One Feather made the decision to return to school.

One Feather applied to UNM-LA, rented an apartment in Los Alamos and began classes in the fall of 2013. Taking a full load of classes each semester, he was able to complete the robotics program by the fall of 2015. He then continued taking classes in the pre-engineering program until graduation this past May.

As a UNM-LA student, One Feather did a work study in robotics through the Accelerate program. With adjunct professor Don Davis, One Feather helped organize the Robotics Lab while studying robotics. At the same time, he was developing his first robot.

Recalling the experience, One Feather offered, “What’s involved in making a robot? First, it must be conceptualized, planning out what parts I will need and how it will move. Decisions must be made about whether it will be autonomous or remote controlled.”

One Feather’s first version of a walking robot was more of a “waddling” robot, with an awkward gait. He analyzed the movement and realized it needed ankle joints. That update allowed the robot to move with much more stability.

“I was honored when the first robot that I built got selected to go on display at the Bradbury Science Museum during the summer of 2014,” he recalled.

Besides working with the robotics program, One Feather was invited to join the UNM-LA chapter of Phi Theta Kappa National Honor Society (PTK) and served as president for two years. PTK not only recognizes academic achievement, it also encourages community service projects.

One Feather led a project in which members of PTK planted a garden on the high school grounds with a variety of local trees and fauna, with the intent of modeling what a healthy forest looks like. At this point the trees are small, but eventually the model forest will provide a nice space for relaxing.

Outside of the university, One Feather also participates in the Habitat for Humanity house building project in Los Alamos that began last fall. The new home owner is a friend, and he has volunteered every work weekend since the project began.

In reflecting on his time in Los Alamos and his experiences at UNM-LA, One Feather had only praise. He stressed the importance of the small classes, which were conducive to personal interactions, both between students and professors and between students in the same class.

He mentioned that UNM-LA’s Grace Willerton, Student Success Associate, was a tremendous help in guiding him through the re-entry to academics after so many years. As for living in Los Alamos, One Feather enjoyed the small town, as well as living near his sister.

One Feather looks forward to the next chapter of his academic journey at New Mexico Tech where he plans to pursue a bachelor’s degree in Mechanical Engineering. Although he’s not sure exactly where this will lead him, he is excited to explore both nanotechnology and explosives engineering.

To learn more about the robotics, pre-engineering, and other programs at UNM-LA, visit losalamos.unm.edu.