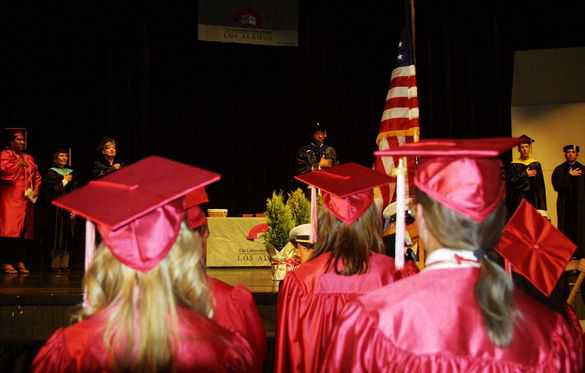 Convocation Speaker Dr. Chaouki T. Abdallah is the Provost and Executive Vice President for Academic Affairs at the University of New Mexico. He is currently a professor and chair of the Electrical and Computer Engineering Department at UNM.

Dr. Abdallah asked the graduates to think about lampposts and brick walls. He reminded the audience of the person who searches for their keys under the lamppost because that’s where the light is, even though the keys were lost elsewhere.

“Look where the light is, but do venture out from there,” he said. “Be willing to be wrong and be willing to change your mind.”

Dr. Thomas Beach, president of the Faculty Assembly, announced the winner of the Faculty Initiative Award, which provides $3,500 to a UNM-LA faculty member to be used to complete an academic project or goal. Dr. James Cook received the award for his plan to write an introduction to the physics lab and design experiments to go with it.

Recognition was given to Ivette Jimenez, who was named to the 2012 New Mexico All-State Academic Team.

Sandra TamuPovi, who received a Bachelor of University Studies degree at the ceremony, spoke on behalf of those receiving bachelor’s degrees.

“I encourage all of you to think about what it took for you to get here,” TamuPovi said. “Hold it of value. It was not only a choice, but a dream come true.”

TamuPovi recalled how proud she was when her mother received her nursing degree. Her own 4-year-old daughter was watching her receive her own diploma. “We do this so our children can have a better life,” TamuPovi said. “We share this accomplishment with our children.”

Jeffrey Bold spoke on behalf of those receiving associate degrees. Bold received his Associate of Arts in Pre-Business Administration.

“College was at the bottom of my list when I graduated [from high school], but I never stopped learning,” Bold said.

Upon returning to school, Bold decided to focus on environmental accounting.

“This accomplishment is about our responsibility to apply ourselves and to make the world a better place,” hed said.