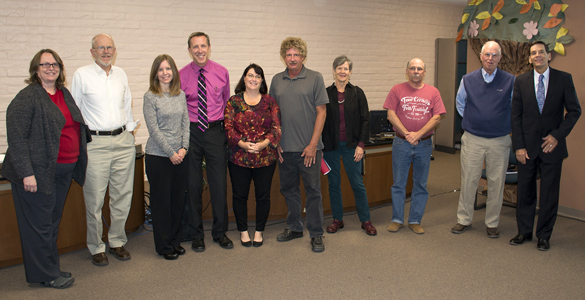 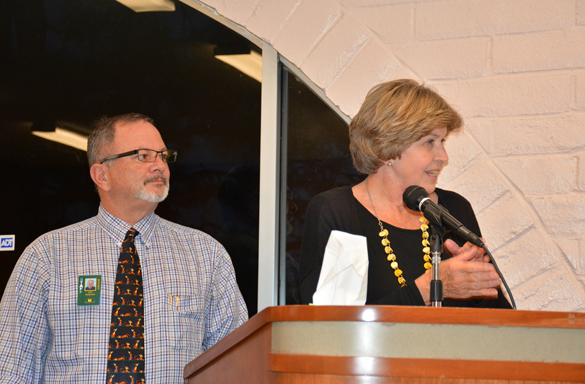 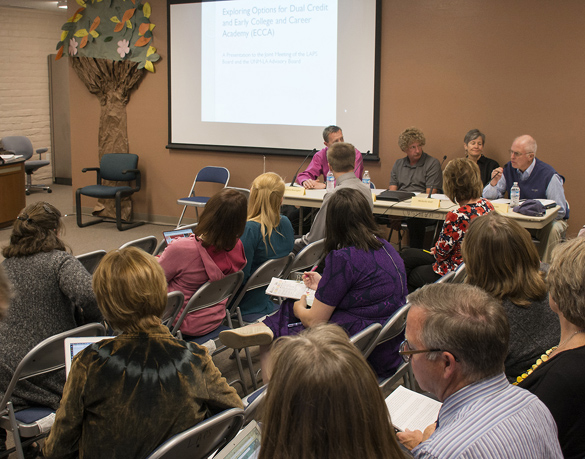 The University of New Mexico-Los Alamos (UNM-LA) Advisory Board and the Los Alamos Public Schools (LAPS) Board held a special joint meeting Tuesday, Oct. 11 to hear the report of a committee that had been established to explore options for Dual Credit and the Early College and Career Academy (ECCA).

After the presentation, the UNM-LA Advisory Board passed a Resolution and Proclamation for a mil levy that could provide operational funds to UNM-LA. These funds would provide funding for UNM-LA “to use in meeting its educational goals.”

UNM-LA Board Chair Dr. Steve Boerigter noted that “one of our absolute goals is to support the implementation of the Early College and Career Academy.” LAPS School Board Presidet Jim Hall and the other members of the LAPS Board indicated their support for the UNM-LA mil levy.

During the presentation to the joint boards, LAPS School Board member Jenny McCumber explained the formation of the joint working group, first outlined in resolutions adopted last spring by both the LAPS Board and the UNM-LA Advisory Board. In order to better serve LAPS students taking classes at UNM-LA, the group was tasked with recommending actions to:

UNM-LA CEO Dr. Cindy Rooney LAHS Asst. Principal Mike Johnson discussed dual credit courses and the early college high school program. Nationally, many high school students have been shown to benefit from access to college courses during their high school years. Benefits include a greater likelihood for students to go to college, as well as higher completion rates at college, and completion of college in a faster time frame. Dr. Rooney noted that UNM-LA and LAPS have been partnering to offer dual credit and college-level courses for Los Alamos High School (LAHS) students for many years. The number of LAHS students taking UNM-LA classes has grown from 132 students in 2010-2011 to 299 students during the 2015-2016 academic years. During the same time period, the number of LAHS student credit hours has increased from 609 to 1,094.

Next, Johnson described the creation of the Early College and Career Academy (ECCA), the early college program at LAPS, which currently has 50 students enrolled. Johnson explained that when designing the program, “There is no set model, so our goal was to create an early college program that matched Los Alamos and the needs of the community.”

Dr. Sharon Hurley (UNM-LA) and Brent Collom (LAPS) reported on the Pathways Subcommittee of the LAPS/UNM-LA joint committee. Goals of the Pathways Committee included aligning expectations of parents and students with program outcomes, considering community and regional employment needs, focusing on certificate programs, and creating programs that can scaffold into associate degree programs and/or transfer to bachelor’s degree programs.

The committee determined that the initial target programs should be Marketing, Electromechanical Technology, and Emergency Medical Services (EMS). These programs were based on the need for more electromechanical workers in the near future at Los Alamos National Laboratory (LANL), the needs expressed by local businesses for more workers with marketing skills, and a regional and national need for students in the Emergency Medical Services area. These areas also matched with many of the student interests as noted in their applications for the ECCA program. The Pathways Subcommittee presented one academic pathway by which students could complete their academic requirements for both high school and a UNM-LA certificate in four years.

Kay Willerton (UNM-LA) and Brad Parker (LAPS) reviewed the work of the Scheduling Subcommittee. Challenges include finding ways to match the LAPS and UNM-LA annual schedules, weekly schedules, and bell schedules. The high school maintains a weekly A/B schedule, where classes meet every other day, with meeting days rotating each week. UNM-LA maintains a Mon/Wed or Tues/Thurs schedule. As a possible solution, it was proposed that the high school schedule core classes in the morning while UNM-LA offers dual credit classes in the afternoons.

Dr. Rooney reported for the Finance Subcommittee by identifying monetary challenges of providing these programs (Dual Credit and ECCS). LAPS is required to provide instructional materials for high school students participating in these programs, for which they are not fully reimbursed. By state law, UNM-LA does not receive any tuition or general fees for the high school students participating in their classes. The state funding formula provides reimbursement for dual credit students based on the past delivery of credits. This reimbursement amount has been declining in recent years, even as the number of students served has been increasing. For FY17, the amount included in the funding formula reimbursement for UNM-LA will be only 6.4% of the calculated value of the tuition and fees for courses provided to dual credit students.

Specifically, based on the Higher Education Department funding formula for FY17, UNM-LA will receive only $5,273 of the $82,041 estimated tuition value for the three year average of dual credit student hours delivered during 2012-13, 2013-14, and 1014-15. Dr. Rooney also noted that an increase in dual credit students at UNM-LA classes has resulted in a few classes having primarily non-paying LAHS students. In addition, with an overall increase in student population, UNM-LA is experiencing a lack of physical space.

Jim Hall offered his appreciation for the progress the joint committee has made. Regarding the dual credit and ECCA programs, he reviewed, “I see this as serving three populations: students who want an early start on college, students preparing for post high school employment, and students who want courses not offered in our high school.” He continued, “I am very concerned about the financial impact on UNM-LA. This idea that you lose money on every student and you can’t make it up in volume is a real problem… I think it’s very important … as the program grows, to benefit both organizations, to see that the proposed (UNM-LA) mil levy passes.”

UNM-LA Advisory Board president Steve Boerigter offered, “Of course the obvious mechanism by which we can help pay for this program is by allowing those operational funds that can be generated from the mil levy to feed into the support of the program.”

The UNM-LA Board then voted unanimously to officially proclaim a mil levy election, which will be held in conjunction with the LAPS Bond election by mail-in ballot in January, “for the purpose of current operations, maintenance, and capital improvements for use in meeting its educational goals.” The proclamation calls for a “property tax levy of $1 per each $1,000 of net taxable value of property.” This translates to an estimated cost of $33.33 per $100,000 of assessed property value. In 2013, a proposed property tax levy of $2 per $1,000 for UNM-LA failed to be approved by voters by a margin of 246 votes. As noted by Dr. Boerigter, if passed by the voters in January, the funding would provide support for programs such as dual credit and ECCA.

In making their case for the mil levy to the UNM Board of Regents last spring, UNM-LA officials noted that the total number of students attending UNM-LA has increased by 36 percent from 2008 to 2015, while the support from the state has decreased by 29 percent during the same time period. This fall, enrollment at UNM-LA continues to grow, with 1,050 enrolled, an increase of 9 percent compared to last fall. Other campuses around the state are generally reporting declining or flat enrollments. At the same time, state funding continues to decrease, most recently with a 5 percent cut to all higher education institutions during the Special Session completed earlier this month.

In closing comments, several board members expressed appreciation to the committee for their work and the progress that had been made. Both Boerigter and Hall indicated that it is very important for UNM-LA and LAPS to continue to work together to bridge the gap between high school and college for local students.

To learn more about the programs offered at UNM-LA, visit http://losalamos.unm.edu.