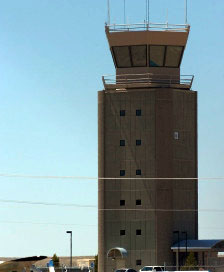 The control tower at the Double Eagle II airport in Albuquerque. Courtesy/DAAPII
U.S. SENATE News:
WASHINGTON, D.C. – Friday U.S. Sen. Tom Udall welcomed the Federal Aviation Administration’s (FAA) decision to delay air traffic control tower closures, including those in New Mexico.
He also announced support of a bipartisan bill to halt the closures for the next two years.
Last month, the FAA announced it would end funding for 149 air traffic control towers as a result of sequestration.
The closures, which were scheduled to begin on Sunday, April 7, included Albuquerque and Santa Fe.
Control towers in Lea County and Roswell were originally considered for closure but were left off the agency’s final list which focused closures on towers with contract, as opposed to FAA employees.
Friday, the FAA announced it would delay the closures of all 149 control towers until June 15, 2013.
Udall also announced that he will sponsor a bipartisan effort with Sens. Jerry Moran (Kan.) and Richard Blumenthal (Conn.) to block the FAA from implementing any closures for the next two years.
“I welcome the FAA’s response to our concerns and decision to stop local tower closures,” Udall said. “Air traffic controllers play a critical role in ensuring our pilots and passengers can fly safely in and out of airports in New Mexico and across the country. Closing any towers would have a detrimental effect on the health of local economies and the safety of those who rely on these skilled employees — especially in rural communities.”
Udall will be a cosponsor of legislation that will prohibit the Federal Aviation Administration from suspending or terminating the operation of any air traffic control tower during fiscal year 2013 or 2014, regardless of whether the tower is operated by FAA employees or federal contractors.
The bill also requires the agency to resume operations for any tower closed before the bill is enacted.
Funding for the Double Eagle Tower in Albuquerque was originally scheduled to end April 21, 2013 and the Santa Fe Tower at the Santa Fe Municipal Airport May 5, 2013.
March 15, Udall led a delegation letter to the FAA Administrator questioning the rationale for the closures and encouraging the agency to work on alternatives that did not negatively impact local economies.
While sequestration is forcing a 5 percent reduction in the FAA’s overall fiscal year 2013 budget, the Contract Tower Program was slated for a 75 percent reduction.
Menu
LOS ALAMOS