Udall Votes Against Confirmation Of Mike Pompeo As CIA Director 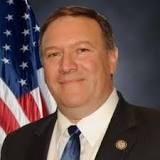