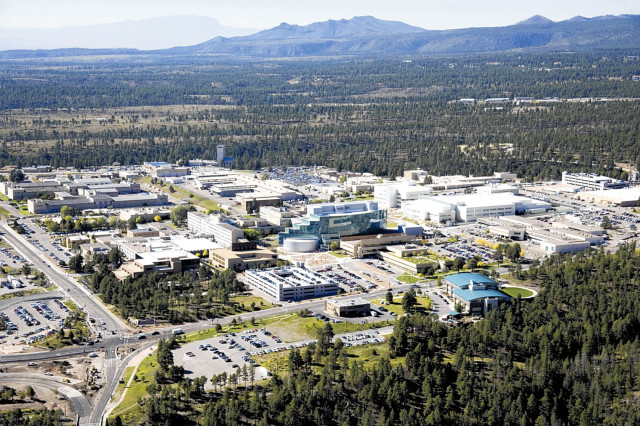 WASHINGTON, D.C. – U.S. Senators Tom Udall and Martin Heinrich and U.S. Representative Ben Ray Luján announced today that the necessary Senate and House committees have approved a reprogramming request for an additional $19 million needed to assist in maintaining the ongoing cleanup and environmental management efforts at Los Alamos National Laboratory (LANL). The news comes just days after the New Mexico lawmakers sent a letter  to the committees urging their approval of the request made by the Department of Energy (DOE) and the White House for the critical funding.

“Congress’ quick approval of the $19 million we’ve been pushing for is welcome news to prevent layoffs and ensure the stability of critical nuclear waste cleanup efforts underway at LANL,” said Sen. Udall, a member of the Senate Appropriations Committee. “Getting funds reprogrammed is no easy task — especially with the sequester taking a toll across the nation — so I’m proud we have made progress in getting LANL the resources they need to meet legal obligations and safely dispose of the waste. The White House and Department of Energy have been very responsive to our efforts and I will continue doing everything I can to secure additional funds to get the job done.”

“I’m pleased that Los Alamos National Laboratory will receive sufficient funding this year to prevent layoffs and continue ongoing defense legacy waste cleanup efforts–an important commitment the Department of Energy has made to the people of New Mexico,” said Sen. Heinrich, a member of the Senate Committee on Energy and Natural Resources. “LANL must have sufficient resources to help ensure all planned restoration and protection efforts remain on schedule and critical milestones are met. I’m encouraged by the progress we’ve made, and will continue to advocate for waste cleanup to remain a top funding priority for the Department of Energy.”

“Shifting these critical funds from other areas in the Department of Energy to environmental cleanup at LANL is an important step forward to meet the government’s commitment to remove waste from the lab,” said Rep. Luján, a member of the House Energy and Commerce Committee.  “I am pleased that our efforts to encourage the committees to act quickly will guarantee these vital funds and ensure environmental cleanup at LANL continues.  As we have seen from the Las Conchas fire, removing this waste is not only the right thing to do for the environment, but is a matter of safety for the community.”

Following the Las Conchas fire in June 2011, DOE and the State of New Mexico made a framework agreement to expedite the removal and off-site shipment of high-risk combustible and dispersible transuranic (TRU) waste currently stored above ground at LANL. Under the new agreement, DOE committed to remove the 3,706 cubic meters of above ground TRU waste by June 30, 2014.

To ensure critical deadlines are met, the Obama Administration requested $239 million for LANL cleanup in the fiscal year 2013 budget. However, a continuing budget resolution froze the cleanup funding level at $189 million and sequestration cuts further reduced that figure to $173 million. Reprogramming actions allow federal agencies to shift funds between accounts during a fiscal year but must be approved by the White House Office of Management and Budget and Congressional Committees with jurisdiction.

On April 3, 2013, Udall, Heinrich and Luján wrote to DOE Secretary Steven Chu requesting an additional $50 million be made available to LANL to ensure all priority cleanup efforts stay on schedule. According to LANL, at least $15 million is needed to prevent an interruption in the transuranic cleanup operations.The National Nuclear Security Administration (NNSA) is considering a further $21 million contribution to LANL cleanup efforts for 2013.

Udall pushed for the additional funds in a recent phone call with White House Office of Management and Budget Acting Director Jeffery Zientz. He also emphasized to Acting NNSA Administrator Neile Miller at a recent Appropriations Energy and Water Subcommittee hearing that there is a lack of sufficient funding for important cleanup programs at LANL, which are crucial to maintaining strong community support for the lab.

During the Energy and Natural Resources Committee hearing on April 18, 2013, to consider the president’s proposed budget for the Department of Energy for fiscal year 2014, Heinrich sought assurance from DOE’s Deputy Secretary and Chief Operating Officer Daniel Poneman that waste cleanup efforts at Los Alamos National Laboratory would receive sufficient funding this year. Heinrich also discussed his ongoing effort to ensure all priority cleanup efforts at LANL stay on schedule with Energy Secretary nominee Dr. Ernest Moniz during his confirmation hearing on April 9, 2013.

As a member of the House Energy and Commerce Committee, Luján and his office have been in close contact with the White House, Department of Energy, and Office of Management and Budget, encouraging swift action to prioritize environmental cleanup at LANL and make additional funds available that meet the government’s commitment to remove waste from the lab.