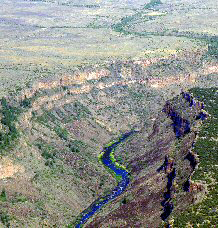 WASHINGTON – U.S. Sens. Tom Udall and Martin Heinrich and Rep. Ben Ray Luján, have reintroduced legislation in the Senate and House to protect the Río Grande del Norte in Northern New Mexico, an area comprised of more than 240,000 acres of BLM-managed lands in Taos and Rio Arriba Counties.

Since 2009, the three lawmakers and former Sen. Jeff Bingaman have worked — with the support of the local communities – to pass legislation to designate the culturally and recreationally significant lands as a National Conservation Area.
“Some of Northern New Mexico’s most historically and culturally rich treasures can be found in these areas,” Udall said. “The residents of Taos and Rio Arriba counties have joined us in an effort to protect their incredible landscapes and ensure the lands remain accessible for the benefit of locals and visitors. I was proud to take up this initiative with Jeff Bingaman and we will work to see that the preservation of the Río Grande del Norte is part of his lasting legacy.”
“The Río Grande del Norte is home to a great deal of New Mexico’s history and culture,” Heinrich said. “There are many important traditional, cultural, and religious sites in the Río Grande del Norte that are still in use today. These lands are also important to residents and visitors who come for the recreation opportunities, like hunting and fishing, and who bring a lot of resources into New Mexico’s economy, especially rural communities. I am proud to work with my colleagues on this initiative, especially with former Senator Jeff Bingaman, who championed this cause. We will continue his efforts to preserve these lands for future generations.”
“Living in New Mexico we have a special connection with the majestic land we are blessed to live on, and the Río Grande del Norte is one of the crowning jewels in our state,” Luján said. “Whether it is for recreation or farming, sustaining a way of life or finding inspiration, the Río Grande del Norte impacts all those who visit and all those who live off the sustenance it provides. Protecting this land should be a top priority, and Secretary Salazar’s visit to Taos in December of last year reinforced that there is overwhelming support by the local community to do so.”
The House Natural Resources Committee and the Senate Energy and Natural Resources Committee both held hearings on the legislation last congress.
In an October 2012 letter, Bingaman and Udall asked President Obama to consider designating the area for national monument status.
In a separate letter, Luján and Heinrich also asked the administration to make the area a monument.
In December, Secretary of the Interior Ken Salazar hosted a public meeting in Taos to explore possible protection of the area. Residents showed their overwhelming support for protecting the Río Grande Del Norte and the group unanimously spoke out in favor of a monument designation.
The Taos County Commission, Village of Questa, Taos Chamber of Commerce and Mora Valley Chamber of Commerce, along with more than 160 local businesses, support permanent protection of the Río Grande del Norte.
Menu
LOS ALAMOS