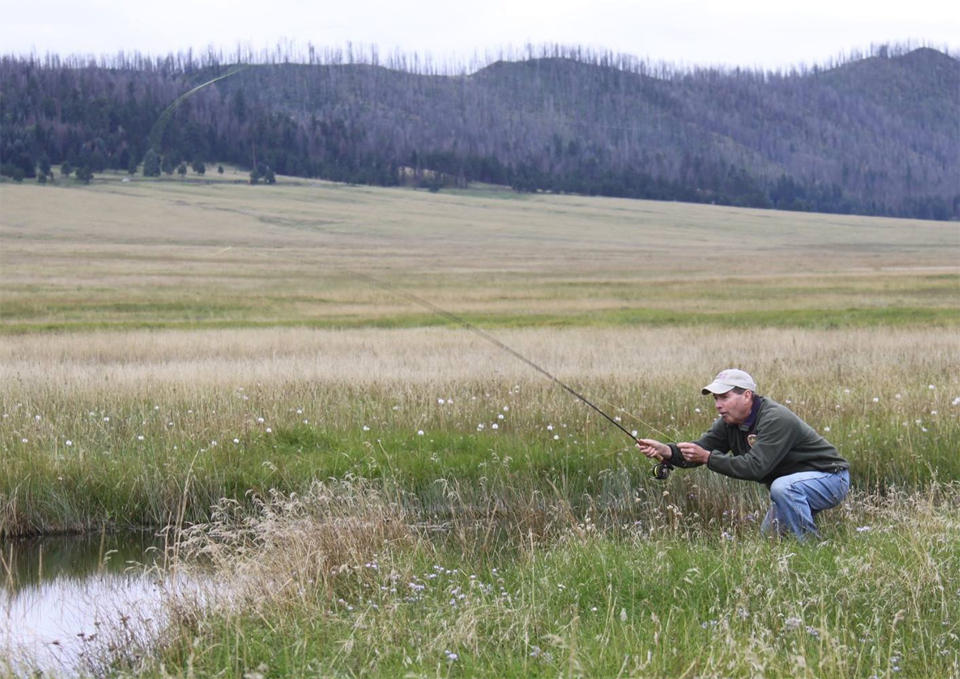 Sen. Tom Udall in September at the Valles Caldera. Courtesy/jemezdailypost.com

The National Park Service (NPS) has selected 69 projects at 63 parks nationwide to highlight during its centennial celebration this year. As part of their selection, the Valles Caldera and Bandelier National Monument will receive $20,000 to conduct forest restoration monitoring with local youth.

The new funding will help expand Valles Caldera’s successful youth forest restoration program to Bandelier. Part of the Every Kid in a Park initiative, the program engages local Tribal youth in resource preservation and restoration efforts occurring on the land they consider sacred.

This experience helps inspire the next generation of stewards of our public lands. Additionally, the program supports the park’s innovative My Trail Program which involves local 4th graders in creating new trail signs.

“The Valles Caldera is a stunningly beautiful part of the Jemez Mountains, and I was proud to spearhead efforts to open up public access by transitioning management over to the National Park Service,” said Udall, Ranking Member of the Senate Appropriations Subcommittee on Interior, Environment and Related Agencies. “That change also made the Preserve eligible for honors like participating in the National Park Service’s centennial celebration, and I’m excited about this new project to strengthen both it and neighboring Bandelier National Monument. Highlighting these jewels as part of the Park Service’s centennial events will attract new visitors to New Mexico, and the funding award will also help kids in the community find meaningful ways to experience and contribute to the preservation of our state’s natural wonders.”

“As a sportsman, I know firsthand how incredible the Valles Caldera is,” said Heinrich, a member of the Senate Committee on Energy and Natural Resources. “I was proud to help lead efforts to transition the Preserve’s management to the National Park Service to increase public access to recreation opportunities. Recognizing Valles Caldera and Bandelier National Monument during the National Park Service’s centennial celebration will bring more tourism dollars to northern New Mexico and put young people to work preserving our public lands. I will continue to work on behalf of New Mexicans to ensure that we protect the Valles Caldera and Bandelier so future generations can hike, fish, hunt, and pass New Mexico’s outdoor traditions to their children.”

“The Valles Caldera is a special place in Northern New Mexico that captures the natural beauty of the Land of Enchantment as well as the culture and heritage that has spanned generations,” Luján said. “The Valles Caldera is truly one of our greatest treasures in New Mexico. The National Park Service’s Centennial Challenge Project will protect and preserve the Valles Caldera and Bandelier, while engaging younger generations in forest restoration and resource preservation and strengthening the ancestral bond of local Pueblo Indian youth.”

Oct. 1, 2015 marked Valles Caldera’s official transition from a unique management structure as part of the U.S. Forest Service to management by the NPS. Udall and Heinrich pushed for the change to increase public access after extensive input from local residents, sportsmen, veterans’ organizations, business owners and elected officials.

Their plan ensures the new NPS management will maintain access for hunting and fishing while protecting the Preserve’s natural and cultural resources.

Nationwide, NPS Centennial Projects are improving visitor services, supporting outreach to new audiences, and strengthening partnerships to reinvigorate national parks and forge connections to new communities. The program is supported through a $15 million congressional appropriation and nearly $33 million in matching funds from dozens of partner organizations.