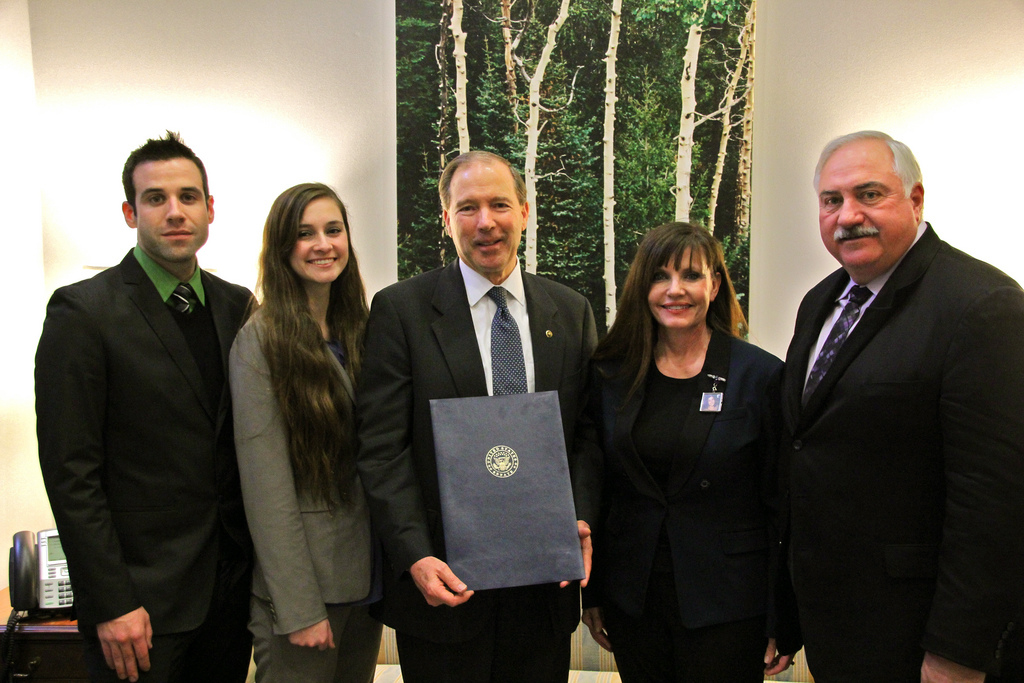 U.S. Sen. Tom Udall in his Washington, D.C. office Tuesday with the family of murdered NMSU student Katie Sepich. Courtesy/Tom Udall’s Office
U.S. SENATE News:
WASHINGTON, D.C. – U.S. Sen. Tom Udall welcomed the Sepich family to his Washington office Tuesday to present them with signed copies of the Katie Sepich Enhanced DNA Collection Act of 2012, the federal legislation President Obama recently signed into law.
Udall met with Jayann and Dave Sepich and their two children to give them copies of the legislation and praise their efforts to expand “Katie’s Law” nationwide.
Click here to view photos of the Sepich family in Senator Udall’s Washington D.C. office.
“For almost 10 years, and through Katie’s memory, Jayann and Dave have dedicated their energy to preventing violent crimes and saving lives,” Udall said. “It is because of their work we were able to pass ‘Katie’s Law’ on the federal level I want to thank them for their tireless efforts.”
“We’re so incredibly grateful of the support we’ve had from Senator Udall and our Congressional delegation, and we just want to say thank you,” Jayann Sepich said. “When the United States Congress says this is something we’d like to see move forward and provides grants to see that this happens, it makes a difference.”
Udall fought to pass the Katie Sepich Enhanced DNA Collection Act to create incentives for states to implement programs, like New Mexico’s, to collect DNA from individuals arrested for serious crimes.
Earlier in the day, the Sepich family attended oral arguments before the Supreme Court in the case of Maryland v. King. The court is hearing the case to decide the constitutionality of police authority to collect DNA samples from individuals arrested for crimes, a main component of “Katie’s Law.”
According to DNA Saves, the organization formed by the Sepichs to educate policy makers and the public about the value of forensic DNA, 26 states have similar versions of “Katie’s Law.” New Mexico passed the law in 2006.
Menu
LOS ALAMOS