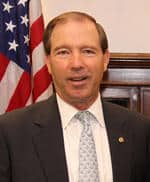 U.S. Sen. Tom Udall
U.S. SENATE News:
WASHINGTON, D.C. ― U.S. Sen. Tom Udall announced Friday the 50 New Mexico students who have received his nomination to attend a United States service academy beginning in 2018, including four students from Northern New Mexico.
A congressional, vice-presidential, or service-connected nomination is required for admission to the U.S. Military Academy (West Point), the U.S. Naval Academy, the U.S. Air Force Academy and the U.S. Merchant Marine Academy. Students receiving Udall’s nomination completed a competitive application process, which included an interview with the senator’s Military Academy Service Panels, composed of military and community leaders.
“I am excited to congratulate the New Mexico students I have nominated to the United States service academies this year,” Udall said. “These students represent New Mexico’s best and brightest, and I wish them luck as they continue with the admissions process. These exceptional students have demonstrated strong leadership in both their academic and extracurricular endeavors, as well as a commitment to serve — a true testament to their character and motivation. All of the service academies provide an excellent education that prepares students to excel in both military and civilian life. I have no doubt these students will represent New Mexico well as they continue their education and pursue a life of leadership and service.”
These students will now compete for admission to their service academy over the coming months. Those admitted will begin classes in the summer of 2018 as members of the class of 2022.
The following are the students nominated from Northern New Mexico:
United States Military Academy (West Point)
Annika Davenport of Los Alamos
Lauren Naranjo of Española
United States Air Force Academy
Maryssa Martin of Española
United States Merchant Marine Academy
Lane Hagstrom of Farmington
Menu
LOS ALAMOS