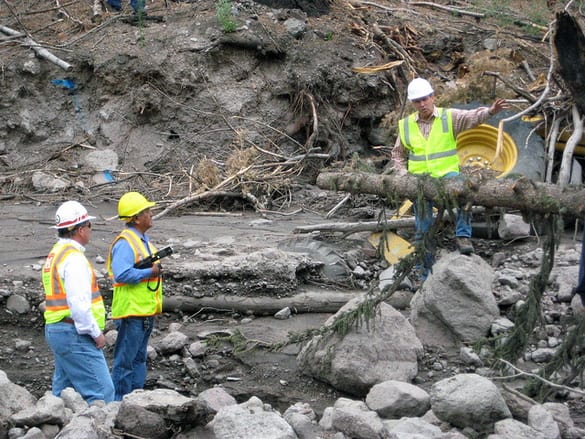 Sen. Tom Udall, right, tours the Santa Clara Pueblo burn area one year after the Las Conchas Fire. Courtesy photo
WASHINGTON – U.S. Senators Tom Udall, Jeff Bingaman and Rep. Ben Ray Luján announced Friday that more than $11 million in federal assistance relief is being made available for Santa Clara Pueblo following recent flooding in the area.
On July 13, the New Mexico officials wrote a letter to Secretary of the Interior Ken Salazar, FEMA Administrator William Fugate and Assistant Secretary of the Army Jo Ellen Darcy, asking that federal funding dedicated for flood mitigation and restoration efforts be swiftly released to the tribe.
b
At the time, Santa Clara Pueblo had received only $379,000, a fraction of their requested $31 million. Pueblo Gov. Walter Dasheno had declared another disaster the week of July 16 following new flooding. 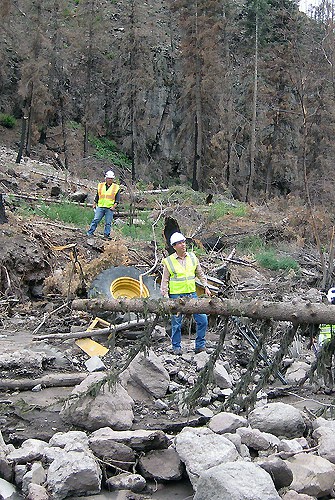 “I’m pleased that FEMA has responded to our request for assistance,” Udall said. “Santa Clara Pueblo has done its best to deal with extreme weather events, and this much needed relief will help ensure the Pueblo ponds are cleared from sediment. It’s important that we continue to work together so the Pueblo has the resources it needs to recover from the aftermath of the Las Conchas Fire.”
“Last year’s Las Conchas fire did a tremendous amount of damage to Santa Clara Pueblo lands, and recovery will take years,” Bingaman said. “I’m very glad the Obama administration has approved this $11 million grant to protect Santa Clara from the threat of catastrophic flooding.”
“I am happy to see these funds released by FEMA to assist the pueblo with flood mitigation,” Luján said. “We have been working hard to make sure FEMA knows the critical nature of approving these funds and I hope they will be released to the tribe by the State of New Mexico as soon as possible.”
In 2011, the Las Conchas Fire burned significant acreage in and around Santa Clara Pueblo, and severe storms and torrential rains that followed caused retention ponds to fill with debris and sediments.
The $11 million grant from FEMA will go towards removing sediment from within the boundaries of the Pueblo, which is 75 percent of that project’s projected cost.
The funds will be made available in approximately 48 to 72 hours to State of New Mexico administrative agents, who will then distribute the money to the Pueblo.
Udall visited Santa Clara Pueblo in early July to tour the recovery efforts following the 2011 Las Conchas Fire when monsoon rains began falling.
Gov. Dasheno and other pueblo officials took the senator through the pueblo canyon to see ponds that had filled with sediment transferred during recent storms.
Menu
LOS ALAMOS