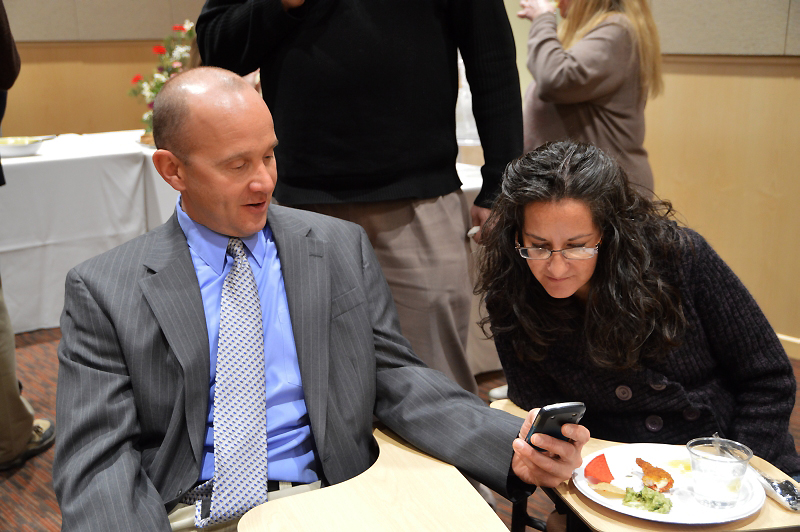 U.S. Senatorial candidate Mick Rich stopped by the Los Alamos Daily Post Thursday afternoon to visit with the news team including reporter Kirsten Laskey prior to his participation in the local GOP Meet & Greet event at UNM-LA. Photo by Carol A. Clark/ladailypost.com

U.S. Senatorial Candidate Mick Rich stopped by the Los Alamos Daily Post Thursday afternoon to visit with the news team prior to his participation in the local GOP Meet & Greet event at UNM-LA.

Rich is a general contractor from Albuquerque and in February he accepted the New Mexico Republican Party’s nomination for U.S. Senate. Rich will face Democrat Sen. Martin Heinrich in the Nov. 6 midterm election.

“I am honored to be the Republican Party’s nominee,” Rich said at the time. “And I am eager to replace Martin Heinrich in the U.S. Senate, and return common-sense Hard Hat values to Congress.”

Rich said his campaign is based on jobs: “New Mexico’s unemployment rate is still second-worst in the nation … I am a proven job creator, and I know how to use federal policy to create good-paying jobs in New Mexico.”

“I am going to serve two terms and pull out all the stops … do everything I can for our state…,” he said. “I am going to be engaged with the Department of Energy and Department of Defense to ensure our military bases and government laboratories have the right mission, that mission is funded, and the funds are properly spent.”

Rich said he wants to add his voice to where the country needs to go:

National Security – National defense is our federal government’s top priority. Because of budget caps enacted by Congress during the Obama Administration, our military has lacked sufficient funding and must be rebuilt. As President Reagan said, peace comes through strength.

“We also must conduct a clear-eyed accounting of our friends and enemies. Under no circumstances should we send aid or make arms sales to foreign countries that support terrorism. We must work together with our allies to fight and defeat terrorists around the world,” he said.

Jobs and the Economy – In addition to benefits of the Tax Cuts and Jobs Act, the White House has helped the economy and jobs by reducing needless government regulations. Getting rid of needless regulations helps employers raise wages and create jobs, and it increases retirement accounts by lifting the stock markets. Progress has been made, but we have far to go in reducing the strangling effects of government regulations.

Infrastructure – As a commercial contractor and Hard Hat for 35 years, this topic is near and dear to my heart. America’s economic strength comes from its infrastructure – its airports, roads, bridges, tunnels, and communications networks. But like our military, our infrastructure has been underfunded for far too long.

The federal government, in partnership with states and cities, must rebuild America’s infrastructure. This will make travel faster, easier and safer, bring fast Internet to rural communities, and smooth and speed interstate commerce. An added win from this $1 trillion investment will be the creation of thousands of good-paying Hard Hat jobs.

Immigration – A common-sense immigration policy is long overdue. But legal immigration cannot work until our borders are secured, and illegal immigration has slowed to a trickle. Then we can decide who should be allowed into our country, and how many.

“I believe that legal immigration should benefit the American economy, workers and taxpayers. Immigrants should be required to be productive members of society, and should bring with them only their spouses and children,” he said.

Trade – As a business owner, I believe international trade benefits Americans. But trade agreements must be fair, and I agree with the President that it is easier to create fair trade agreements with single countries than with large blocks of countries.

“We live in divisive times. But America is strongest when we work together toward common goals,” Rich said. “We need a strong military; secure borders; and a strong economy with good-paying jobs that support families. These are not partisan ideals. They are the basis of our nation’s survival and well-being.”

Rich, 63, was born in the bay area in California and received his civil engineering degree from Oregon State University. He moved to New Mexico in 1980 and married Marion in 1982. The next year, he started his general contracting business. The couple has a son and three daughters.