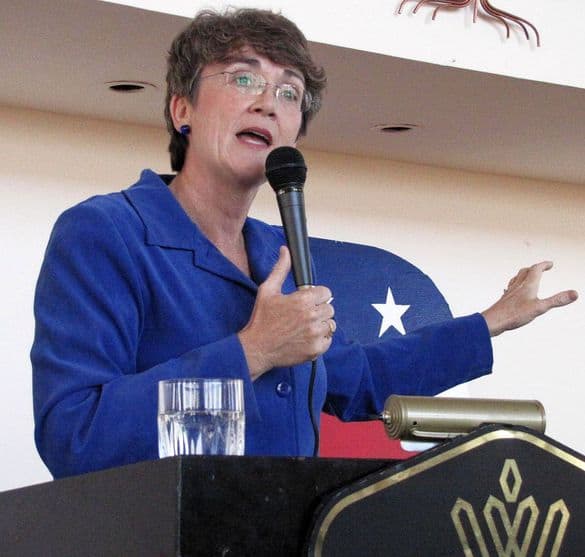 Former U.S. Rep. Heather Wilson, R-N.M., at a Town Hall meeting this week in Los Alamos, today garnered 83 percent of the vote at the State Pre-Primary Convention in Albuqueruqe. Photo by Carol A. Clark/ladailypost.com

ALBUQUERQUE — Heather Wilson, Republican candidate for the U.S. Senate, won the New Mexico Republican Pre-Primary Convention by a landslide today, garnering 83 percent of the vote and demonstrating strong grassroots support from the conservative wing of the party.

In failing to get 20 percent of the vote, Wilson’s opponent Las Cruces businessman Greg Soward did not qualify to be on the ballot. He still has a chance to get his name on the ballot if he obtains enough signatures on a petition.

Wilson said that she was happy to have earned the support of so many great New Mexicans.

“The nation we love is in deep trouble, and it’s not going to be easy to get out of it. With the right leadership, I know we can find the path,” Wilson said following today’s victory. “We will continue to build on this great day to change the direction of the country in November. ”

After Lt. Gov. John Sanchez nominated Wilson at the convention, she went on to call for a new direction in America.

“Washington is taking our country down the wrong path, and we have to change direction,” she said.

“We may not always agree on everything, but I won’t play political games, and I will always tell you the truth,” Wilson told the conservative crowd.

Wilson, third generation Air Force and the granddaughter of immigrants, closed her speech with a call to renew a commitment to the American dream.

“My grandparents came to this country with nothing, and they lived the American dream,” she sid. “Now it’s up to us to keep that dream within reach for the next generation of Americans.”