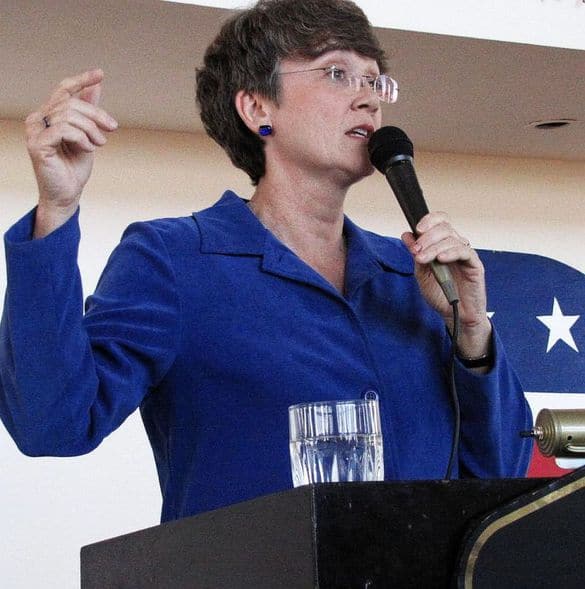 U.S. Senatorial candidate Heather Wilson expressed worry “that there is no longer anyone standing up for Los Alamos National Laboratory since Sen. Pete Domenici retired.”

“Sending out press releases and speaking about amendments after they’ve been decided is ineffective,” Wilson said during a telephone interview today from Albuquerque.

Known for her strong advocacy for homeland security, the former U.S. Congresswoman cautioned about allowing LANL’s Chemical and Metallurgy Research Replacement (CMRR) project to linger in limbo for too long.

“If you delay a facility for five years – and the (congressional) delegation has not been effective in getting it turned around – in five years the CMRR project will be redesigned and sent elsewhere,” Wilson said. “And if you no longer have the core national mission at Los Alamos then the next question asked will be ‘why are there scientists at Los Alamos?'”

Staffing at the Laboratory is now at the same level as it was at the low point of the post-Cold War era and continues to go down, she said.

When asked if it is too late to turn things around, Wilson said, “We are absolutely going to save Los Alamos, but we need a U.S. senator who understands the importance of the Laboratory and its mission. Since Congressman (Martin) Heinrich went to Washington, things have gotten worse … he is from the radical left environmental movement who sees the Laboratory as an environmental pollutant and his extreme agenda is making things harder for New Mexico families.”

Wilson is in the middle of a hotly contested race for retiring Sen. Jeff Bingaman’s seat with Heinrich, a Democrat.

She said nearly 5,300 New Mexicans have contributed to her campaign, which reported today that $1.6 million has been raised in the latest fundraising quarter.

Heinrich’s campaign announced earlier this week that he raised $1.4 million during the same reporting period.

A campaign fundraiser was held for Wilson at the Hilltop House Hotel Wednesday evening at which she addressed four main topics including New Mexico jobs, the CMRR project, governance at LANL and technology transfer.

She said that the Laboratory must be managed in a way that is both conducive to safety and good science.

“There is way too much administrative overhead in Washington and I intend to address that issue,” Wilson said.

She spoke about the fact that 16 years ago laws changed to allow ideas to come out of laboratories and universities and be shared with private industry.

“I’ve known Heather a very long time and I served with her in Gov. Gary Johnson’s administration. I’ve always admired her intelligence and her absolute commitment to do the right thing,” Hall said. “Heather completely understands LANL’s importance to our nation and national security and to Northern New Mexico.”

Hall said that he occasionally reads something in the press about Wilson being hard hearted and he wants the public to understand that he speaks from experience in saying that is not the case.

“Heather was head of the New Mexico Children, Youth and Families Department when I was in the governor’s cabinet and she could not have been more committed to the most vulnerable and at-risk segment of our society to do the best the state could possibly do to help them,” Hall said. “I witnessed the passionate and compassionate side of her during those years and that is one reason why I’ve always supported her. I also saw her take on some of the toughest guys in her defense of those children and I can tell you that those are guys I would not want to be on the other side of the table from.”

Wilson is an Air Force Academy graduate who started and ran a small business before becoming the Cabinet Secretary for CYFD and then serving in Congress for 10 years.

Her Air Force Academy physics professor from 1979 also attended the Los Alamos fundraiser. Richard Joseph and Wilson have stayed in touch all of these years and he spoke to the Los Alamos Daily Post today about his memories of Wilson as a student.

“She was honest and courageous, courageous because she will do what she believes is the right thing to do and she was like that at 19,” said Joseph, now a LANL and Sandia National Laboratories consultant living in White Rock. “I’ve never seen anybody more qualified to be senator than Heather. She is the type of person that we always say we want to see in a high government office – smart, thoughtful, fair, practical and she will work with anyone for the good of this country.“

Wilson is a Rhodes Scholar and mother of three living in Albuquerque with her husband and two teenagers still at home.