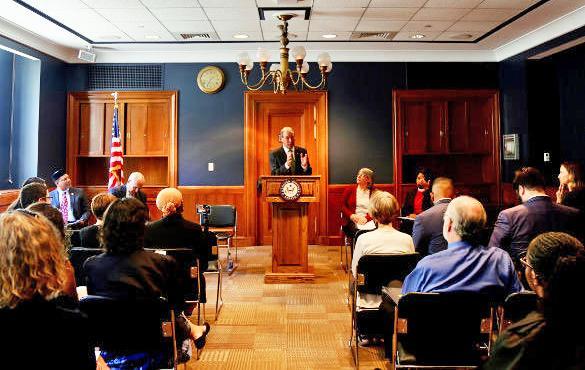 U.S. Sen. Tom Udall (D-N.M.) convenes a Faithful Democracy Coalition 2020 discussion with interfaith leaders. Courtesy photo
U.S. SENATE News:
WASHINGTON, D.C. — U.S. Sen. Tom Udall (D-N.M.) convened a Faithful Democracy Coalition 2020 discussion with interfaith leaders to discuss democracy reform efforts like Udall’s For the People Act, and how such reforms affect issues important to faith communities like social and economic justice, climate change and immigration.
Udall was joined by Imam Talib Shareef, President and Imam of the historic Masjid Muhammad, Rabbi David Saperstein of the Religious Action Center for Reform Judaism, Elizabeth McNichol of the D.C Chapter of the Poor Peoples Campaign, Reverend Dr. Leslie Copeland-Tune of the Nation Council of Churches, and Sister Simone Campbell of NETWORK Lobby for Catholic Justice.
“There is a direct link between our broken campaign finance system and our voting rights system that puts up barriers to the ballot box, and the issues of concern to the faith community,” Udall said. “Issues like gun violence, food security, economic justice, and climate change. The American people, in overwhelming numbers, want Congress to address these issues. But we are not because the representatives in Congress are not representing the American people…We need to put an end to the idea that money equals free speech. And that corporations are people. And reign in an out of control campaign finance system.”
The Faithful Democracy Coalition is an inter-denominational campaign that began in the wake of the Citizens United decision. The Coalition advocates for ending the dominance of big money out of politics, examining the issue from both a faith-based and legislative perspective, and focuses their campaign on the issues of climate change, gun violence prevention, immigration, and private prisons.
“The faith community recognizes how our democratic processes are corrupted at every level: from gerrymandering to voter suppression to campaign finance to foreign intrusion,” said Sr. Quincy Howard, of the NETWORK Lobby for Catholic Social Justice. “In a secular democracy, elections are the closest thing we have to a sacrament. NETWORK Lobby and our faith partners call on our government to restore the people’s faith in our democratic systems by securing our elections, ensuring fair representation of the people, and rooting out the corrupting influence of money in politics.”
“The need for religious leaders from across the United States to lend their voices to the cause of sweeping, comprehensive reform has never been more urgent.  Together, these mainstream religious denominations bring a measure of moral clarity as to why we must address the corrosive effects of unlimited, unregulated money in our political system, as well as the right for every person to have the unimpeded opportunity to vote. These are moral and ethical issues, and the time has come to address them as such. I believe this marks a major milestone on the road to reform,” said Matt Keller, Vice President of. Democracy 21.
“Scripture is replete with warnings against the abuse of power. The Democracy for All legislation will address the concentration of power and money in our political system. When those with wealth use their treasure to overwhelm the voices of ordinary citizens, then our democracy is in danger. The National Council of Churches is committed to repairing our country’s broken democracy,” said Jim Winkler, President and General Secretary of the National Council of Churches.
“For many religious communities, good governance; transparency in our electoral system, including its funding; and fully-realized voting rights for all not only reflect our values but create conditions in which our abiding commitment to justice and equality can flourish,” said Rabbi David Saperstein, Director Emeritus of the Religious Action Center of Reform Judaism.
In March, Udall introduced the For the People Act—a sweeping package of pro-democracy reforms that aims to make it easier, not harder, to vote; end the dominance of big money in politics; and ensure that public officials work for the public interest. The bill serves as Senate companion legislation to H.R. 1 in the U.S. House of Representatives, which passed the House in March of this year. It builds off of Udall’s We the People Democracy Reform Act of 2017, which was introduced in the 115th Congress as a comprehensive reform package encompassing a number of bills championed by Udall and others to address various shortcomings in our political system, and strengthen and revitalize our democracy.
Udall also led Democratic Senators in introducing the Democracy for All Amendment to overturn Citizens United this July. Citizens United and other disastrous Supreme Court decisions have unleashed a flood of unlimited corporate spending in U.S. elections and opened the door for wealthy special interests to have an outsized voice in our government. These decisions have wrongfully equated money with free speech, and wrongfully determined that big, wealthy corporations have the same first amendment rights as people. The Democracy for All Amendment gives the power back to Congress and the states to set reasonable campaign finance rules and limit corporate spending in elections. The amendment would enshrine in the Constitution the right of the American people to regulate the raising and spending of funds in public elections, and curb the concentration of political influence held by the wealthiest Americans.
Menu
Los Alamos
61°
Fair
7:22am6:15pm MDT
Feels like: 57°F
Wind: 17mph S
Humidity: 31%
Pressure: 30.06"Hg
UV index: 0
TueWedThu
50/30°F
54/34°F
59/39°F
Weather forecast Los Alamos, New Mexico ▸