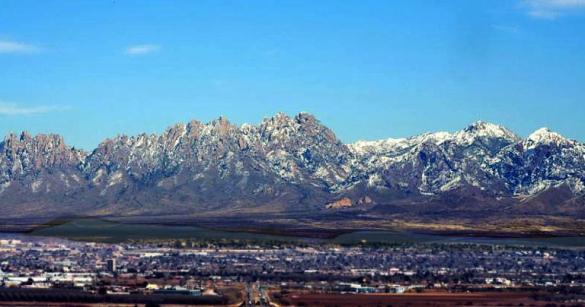 The Organ Mountains to the east of Las Cruces. Courtesy/wikipedia.com

WASHINGTON, D.C. – U.S. Sen. Tom Udall joined fellow New Mexicans Monday in celebrating the five-year anniversary of the proclamation signed by President Barack Obama to designate the Organ Mountains-Desert Peaks in southern New Mexico as a national monument – the culmination of years of work from the local community.

In 2014, President Obama established the Organ Mountains-Desert Peaks (OMDP) National Monument based on legislation introduced by Udall and Senator Martin Heinrich. But since only Congress has the authority to create wilderness, Udall has continued to fight for measures that would designate wilderness and provide gold-standard protection for the wildest places within the national monument.

This year, Udall and Heinrich successfully championed the Organ Mountains-Desert Peaks Conservation Act, which was signed into law as part of a sweeping bipartisan public lands package. The historic legislation establishes 10 permanent wilderness areas within the Organ Mountains-Desert Peaks (OMDP) National Monument, ensuring full protection for land within OMDP and completing the community’s vision for the permanent protection of wilderness opportunities within the national monument. A broad coalition of elected officials, Hispanic leaders, veterans, Native Americans, sportsmen, small business owners, faith leaders, conservationists, and others have worked for years to protect wilderness in Doña Ana and Luna Counties. Udall issued the following statement:

“Five years ago today represented a historic achievement for – and by – the people of New Mexico, when President Obama created the Organ Mountains-Desert Peaks National Monument under the Antiquities Act. Thanks to overwhelming support in the local community and years of work from an incredible coalition, we were able to put the spectacular landscapes of southern New Mexico on recreation maps across the country, all while creating jobs, and boosting our state’s economy. On this day, we celebrate the thousands of New Mexicans who fought tirelessly to make sure the rest of the world recognized just how special this land is for all of us. This monument is a reality because New Mexicans worked hard to get it done – and I’m so proud to have been a part of getting this effort over the finish line.

“Today, the Organ Mountains-Desert Peaks National Monument is a crown jewel of southern New Mexico – a gorgeous landscape that attracts visitors from around the world, and an important economic driver for our thriving tourism economy and outdoor recreation industry. The national monument has put a star on the map for Doña Ana County, and we must continue to build on this success and remain vigilant against this administration’s assault on our most iconic public lands, including unlawful attempts to eliminate or shrink existing national monuments. That’s why I have fought so hard for measures to give permanent protections to this breathtaking landscape, and we finally saw our bill signed into law this year. This landmark legislation is a critical step in safeguarding the monument’s most special open spaces, and ensuring that future generations can enjoy this stunning natural treasure for years to come.”

The Organ Mountains-Desert Peaks National Monument has contributed to significant economic growth in Doña Ana County, and the new monument has put southern New Mexico on the map in national tourism publications like Lonely Planet and Trip Advisor as a prime destination for outdoor recreation, history, and cultural tourism. According to a poll from the Las Cruces Green Chamber of Commerce, 78 percent of Doña Ana County residents support the protection of wilderness within the Organ Mountains-Desert Peaks National Monument.