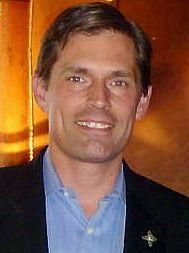 U.S. Sen. Martin Heinrich rallies with local the community Saturday in Raton to fight for the Southwest Chief. Courtesy photo

During the event they expressed their support for maintaining the Amtrak route and discussed the vital role the Southwest Chief plays in contributing to the economic well-being of their communities.

“I’m proud to stand with the community and continue the fight to save the Southwest Chief,” Sen. Heinrich said. “The Southwest Chief isn’t just a railroad route in New Mexico, it is a vital part of who we are and connects places like Raton and Las Vegas to the rest of the nation. The route transports thousands of Boy Scouts from across the country to Philmont Scout Ranch near Cimarron every summer, generating economic activity for businesses in rural areas along the way. Any effort to undermine the route will go against the will of the people who rely on the Southwest Chief.”

“The Southwest Chief is not just a train to us in Raton,” Mayor Neil Segotta said. “It is part of our heritage.”

“Senator Heinrich has demonstrated leadership and effective effort in responding to the issues that are important to Raton and Colfax County throughout his time in the U. S. Senate,” City Manager Scott Berry said.

“There has been unprecedented bipartisan cooperation from government officials to local community members, BNSF and Amtrak to address the $100 million of necessary improvements needed save this vital section of the Southwest Chief,” Commissioner Roy Fernandez said. “Thanks to Commissioner Bill Sauble’s leadership and through a series of  TIGER grants, the Southwest Chief is on track to receiving $71 million of the $100 million needed to ensure it’s critical maintenance.”

“Philmont Scout Ranch remains steadfast in our commitment to Delivering Wilderness Adventures that last a lifetime,” Shelley O’Neill said. “Riding the Southwest Chief plays a vital role in that adventure for thousands of Scouts traveling to the American West.”

“As a business owner who chose to open my business on Historic First Street in Raton because of its proximity to the Southwest Chief stop, and as an Amtrak traveler myself, I know the importance of train travel on tourism and our economy,” Laura Brewer said. “The historic storefronts on First Street and Raton’s natural beauty can certainly encourage someone to come back and spend a little more time in our wonderful city. And the importance to our own citizens of having the option of traveling by train to other cities in New Mexico for specialized medical treatment can’t be overlooked.”