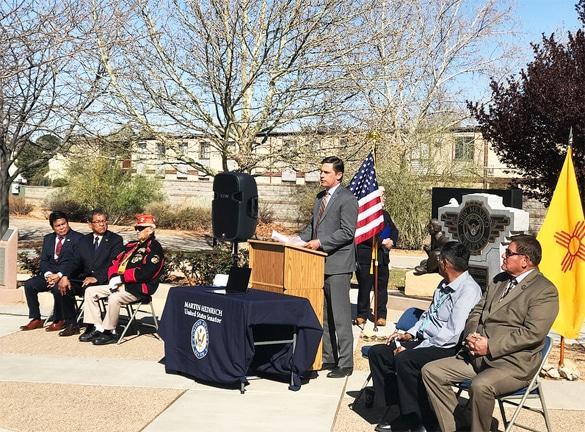 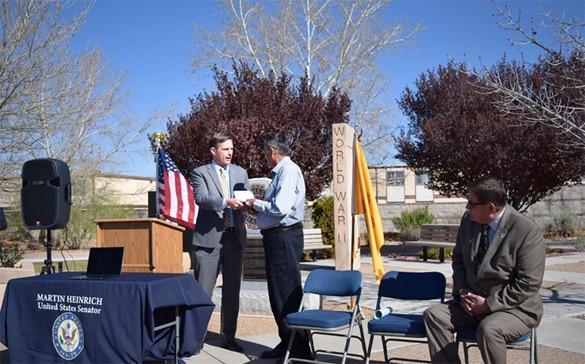 U.S. Sen. Martin Heinrich, left, presents the Congressional Silver Medal to the family of the late Navajo Code TalkerAdolph Nagurski in a historic ceremony today in Albuquerque. Nagurski’s son Benjamin is shown accepting the medal on behalf of the family. Courtesy photo 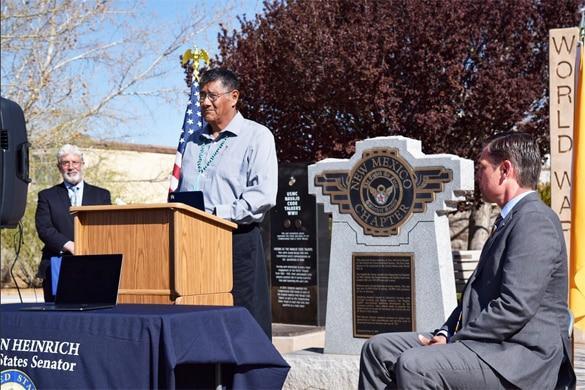 ALBUQUERQUE – Today, U.S. Sen. Martin Heinrich (D-N.M.) presented a Congressional Silver Medal in a historic ceremony to the family of the late Navajo Code Talker Adolph Nagurski, who earned the medal for his service but never received it.

“One of my most important responsibilities as a senator is to help New Mexico’s veterans receive the recognition and care they earned through their service,” Heinrich said. “I am proud to present a Congressional Silver Medal to Navajo Code Talker Adolph Nagurski’s family in honor of his incredible heroism and service to our nation. This recognition is long overdue for the sacrifices Adolph Nagurski made to protect his nation, his homeland and secure the freedom we enjoy today.”

In 2000, medals were authorized by Congress and produced by the U.S. Mint to recognize the Navajo Code Talker’s immense contribution to winning the war against Japan. Unfortunately, due to health issues, Adolph Nagurski couldn’t attend the medal ceremony for Code Talkers at Window Rock in 2001 and for over 14 years, Adolph Nagurski’s family has attempted to get his Congressional Medal. Sen. Heinrich worked to authorize the approval of releasing the prestigious medal and posthumously presented it to Nagurski’s family at the New Mexico Veterans’ Memorial.

Sen. Heinrich, a member of the Senate Armed Services Committee, is committed to ensuring the nation keeps its promises to its men and women in uniform and their families. He has led the effort to reduce the disability claims backlog, collaborating with U.S. Department of Veterans Affairs (VA) to work with Community-Based Outpatient Clinics across New Mexico to ensure their needs continue to be met. Heinrich also cosponsored legislation that was signed into law last year to modernize and strengthen veterans’ education benefits and enhance the post-9/11 G.I. Bill.