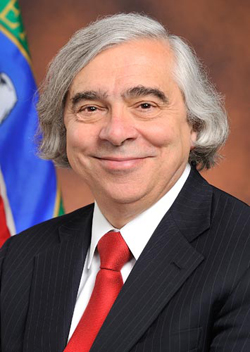 “The key parameters established today lay the groundwork for achieving the P5+1’s objective of blocking Iran’s four pathways to nuclear weapons: the two uranium pathways through Iran’s Natanz and Fordow enrichment facilities, the plutonium pathway at the Arak reactor, and the covert pathway.

America’s leading nuclear experts at the Department of Energy and its national labs and sites were involved throughout these negotiations, evaluating and developing technical proposals to help define negotiating positions in support of the US delegation. As a result, I’m pleased to say that we are very confident in the technical underpinnings of this arrangement.

Iran’s current breakout timeline of two to three months will be expanded to a minimum of a year, for at least the next ten years.  Its stockpile of enriched uranium will be reduced by 98 percent, leaving it with just 300 kg of 3.67 percent uranium, for the next 15 years.

Iran’s installed centrifuges will be reduced by two thirds, leaving it with just over 5,000 operating IR-1 centrifuges at the outset of the agreement at Natanz – its only enrichment facilty. The underground facility at Fordow will be converted to an international physics center and stable isotope production facility with no enrichment, no enrichment R&D, and no fissile material.

Iran’s enrichment R&D will be significantly limited relative to their current activity and plans, during the first 10 years.  In particular, full cascades of its most advanced centrifuges will not operate in the first ten years.

Iran’s plutonium pathway to a nuclear weapon, the Arak research reactor, will be redesigned to minimize plutonium production. The P5+1will apply the highest technical standards to finalizing with Iran the new reactor design that does not produce weapons-grade plutonium under normal use, with a plutonium pathway breakout timeline of several years. Iran will ship all Arak used spent reactor fuel out of the country for the lifetime of the reactor. For at least 15 years, Iran will not reprocess any used nuclear fuel or conduct any reprocessing R&D – steps necessary to extracting plutonium for use in a weapon – and Iran will not build any additional heavy water reactors – the types often associated with producing weapons-grade plutonium.

Finally, Iran has agreed to extraordinary and comprehensive transparency and IAEA inspections, providing an effective deterrence against covert pathways to a bomb. The enhanced transparency measures will build confidence in Iran’s peaceful intentions for a quarter century and beyond.

I want to thank the Head of the Atomic Energy Organization of Iran Ali Salehi (MIT PhD ’77) for his partnership in discussing the draft technical dimensions that will be essential to reaching a Joint Comprehensive Plan of Action (JCPoA). I deeply appreciate his professionalism, candor, and unwavering commitment to analytical rigor.

However, our work is not done until the JCPoA is finalized by the end of June, and we begin implementation. We will work closely with our P5+1 partners, as well as in consultation with Members of Congress and the scientific community, to ensure Iran’s nuclear program will remain exclusively peaceful.

Certainly, there will be many opinions expressed about the merits of this understanding. I want to be clear – the world should also judge the scientific and technical dimensions of the parameters for a JCPoA as they contribute to halting the possible proliferation of nuclear weapons.  I, along with my DOE colleagues, am committed to seeing this to a successful conclusion.”