SANTA FE — Today, the U.S. Department of Education approved a four-year extension to New Mexico’s “No Child Left Behind” waiver, allowing the state to continue implementing reforms to help struggling schools and students.

New Mexico is just one of five states to receive the extension, which recognizes the state’s success in implementing strong education reform and accountability efforts. 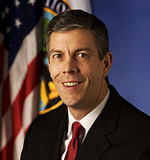 “Today’s recognition proves that with hard work and the courage to stand up for our children, we can improve our schools and provide a brighter future for our state,” Gov. Susana Martinez said. “In just a few years, we’ve made some incredible strides in our school system. But we’re not done yet. We still have much work to do if we want to provide every child with a quality education.”

New Mexico joined Virginia, Minnesota, North Carolina and Kentucky in receiving this fast-tracked waiver extension. States that did not receive this extension will undergo a lengthier process for a one-, two-, or three-year extension.

Moving from a bi-annual renewal process to a four-year timeline is the direct result of New Mexico’s continued commitment to the bipartisan reforms under Governor Martinez’s administration and the results they have achieved for New Mexico’s students.

On a conference call today, U.S. Secretary of Education Arne Duncan praised the education chiefs of the five states “for their courageous leadership to ensure that all children have a chance to be successful.”

Central to the multi-year waiver extension were several key New Mexico-developed reforms, including the A-F grading system, a commitment to higher academic standards, and the educator evaluation and development system, NMTeach.

Since implemented in 2011, the A-F School Grading system has provided administrators, educators and parents with a better understanding of how New Mexico’s schools are performing. PED’s school grading website has been accessed more than 1 million times since its launch in 2012. The grading system also helps the state identify struggling schools to give them the targeted resources they need to succeed. In 2015, for the second year in a row this year, New Mexico has more A/B schools than D/F.

New Mexico has also seen unprecedented growth in graduation rates and is leading the nation with an overall increase of over three times the national average and significantly higher than average growth among nearly every demographic group. Advanced Placement participation has also seen dramatic increases with nearly 15 percent more students taking AP courses since 2012. The gains have been particularly significant among Hispanic, American Indian, and low-income students.

By identifying, for the first time in state history, more than a fifth of teachers in the state as “highly effective” or “exemplary” and nearly a quarter as needing intensive support to improve, NMTeach has allowed administrators to recognize outstanding teachers with a streamlined advancement process statewide and a performance pay pilot program in over 20 districts, as well as the ability to provide better support to struggling teachers.

“We are proud of the results we continue to achieve in New Mexico. By creating a system of support and accountability for our schools, educators and students, we can better provide individual support where needed and recognize the accomplishments of our schools and educators in ensuring that our students are prepared for success in college and careers,” said Public Education Secretary Hanna Skandera. “Since instituting these reforms, we have seen record growth for New Mexico’s students, and we will continue to work tirelessly on behalf of every single New Mexican student.”