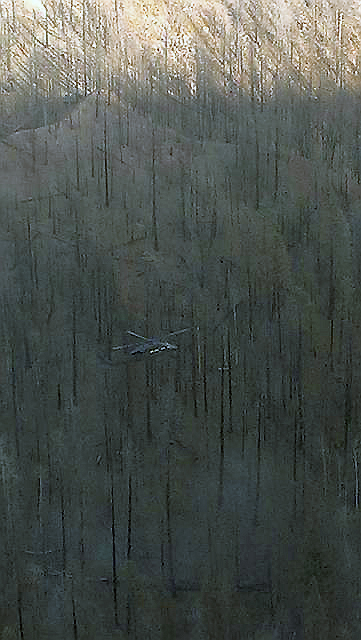 A Black Hawk helicopter on its way to the accident site where a Sierra De Los Pinos man fell to his death Saturday. Courtesy/LAFD

Thomas A. Ilg, 54, a Technical Staff Member at Los Alamos National Laboratory fell to his death while hiking near Forest Road 10 and Forest Road 269.

A Sierra De Los Pinos man in his mid-fifties fell to his death while cutting a tree on a hillside in Cochiti. His name is being withheld pending notification of his next of kin.

“We received a call for assistance at 12:30 p.m. Saturday from the La Cueva Fire Department,” said Los Alamos Fire Department Deputy Chief Justin Grider. “They were busy working to retrieve the body of the missing hiker near Forest Road 10 and Forest Road 269 and asked us to assist with a victim in Cochiti.”

Grider explained that a call was made to the New Mexico National Guard requesting a Black Hawk helicopter to help retrieve the victim because the Las Conchas Fire had left the terrain too risky to rappel.

“He had fallen about 200 feet and we felt it was too dangerous for our firefighters to rappel down and attempt to carry his body out of the canyon because of all the loose rocks, downed trees, debris and holes in the area,” Grider said.

The Black Hawk helicopter with two Los Alamos firefighters on board lifted the Sierra De Los Pinos man’s body out of the canyon and to a waiting medical investigator on Dome Road. The medical investigator transported the body to La Cueva for examination before transporting him to the Office of the Medical Investigator in Albuquerque, Grider said.

“The victim had many connections to Los Alamos and many people here knew him so it was very sad,” Grider said. “It was a tragic day … the people in the area are part of a very close knit community and they really pulled together to help bring him home … we could not have conducted the rescue without them. Everybody involved from the community, to the National Guard to our firefighters did a fantastic job under very sad circumstances.”

Ilg, described as an experienced hiker, had been reported missing by his family when he did not return home from his hike Friday, according to reports. His body was found at the bottom of a 100-foot cliff. He had been employed at LANL since 1996.

In a third event Saturday, police rescued the Rosenberg family who were hiking on the La Luz Trail in the Sandia Mountains when the father became weak and his wife and child went to seek help and became lost. The family is expected to be fine.