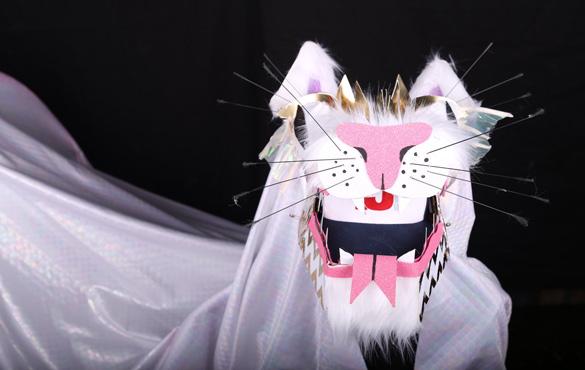 The dragon Falkour in a scene from ‘The Neverending Story’. Photo by Zachary K. Baker
By BONNIE J. GORDON
Los Alamos Daily Post
bjgordon623@gmail.com
Los Alamos Little Theatre’s latest production “The Neverending Story” opens 7:30 p.m. Friday at the Performing Arts Center.
The production is produced by Elisa Enriquez and directed by seasoned director Mimi Adams. Something special about this show is that 10 percent of profits will be donated to Big Brothers and Big Sisters of Northern New Mexico, Adams said.

The large cast is more than half kids ages 5 to 16.

“I love working with the kids,” Adams said. “Everyone in the cast is a great team player. It’s a wonderful cast and I’m super happy.”

The production is a real family affair. Lots of families are involved together as cast and crew members. For example, Adams’ son Sequoyah Rice is the set designer and the mother of a cast member created the head of the dragon Falkour.

“The Neverending Story” (Die unendliche Geschichte) is a fantasy novel by German writer Michael Ende, first published in 1979. There have been a number of adaptations, including a ballet and several films. The world première of the stage production took place in 2012 in Brisbane, Australia.

In the play, Bastian is a lonely, bullied boy, longing for love and acceptance. He escapes to his school attic with “The Neverending Story”, a book he “borrowed” from a peculiar book shop.

Atreyu is a young orphan longing to become a hunter among his people. He accepts the challenge of The Great Quest at the behest of an Empress he has never met.

Fantastica is a land of wishes, dreams, and fantasies, ruled by The Childlike Empress and inhabited by fabulous and magical beings. It is being consumed by a growing malevolence known only as “The Nothing.” Together, can Bastian and Atreyu save Fantastica and embrace the heroes in their own hearts?

“I often peruse dramatic holdings and as soon as I saw ‘The Neverending Story’ I wanted to direct it,” Adams said.

She first encountered the story with the movie version when she was 12, then she read the book.

“The play spoke to me because Bastian is grieving his mother,” Adams said. “My dad died when I was six. It’s a lonely thing to go through as a kid.”

One way Adams’ family coped with grief was to watch movies. She was a huge reader as well. Having the escape hatch of fantasy helped her cope, Adams said.

“Issues like loss and bullying are not often dealt with in stories for kids,” Adams said. “Stories about these issues, that most kids don’t deal with or understand, helps with empathy development.”

In the book, Atreyu’s tribe is based on Plains Indian culture. Adams and her family are members of the Lil’wat tribe from British Columbia so she decided to use that cultural background in the play.

“I wanted to use a culture I know,” Adams said. “It’s also in homage to my mom. This is the first play I’ve directed without her.”

She uses her late mother’s cedar hat and her own raven shawl as costumes for the elders in Atreyu’s tribe.

There is an audience participation element to the play. Those who would like to be part of it will be directed to sit in a special section of the theatre.