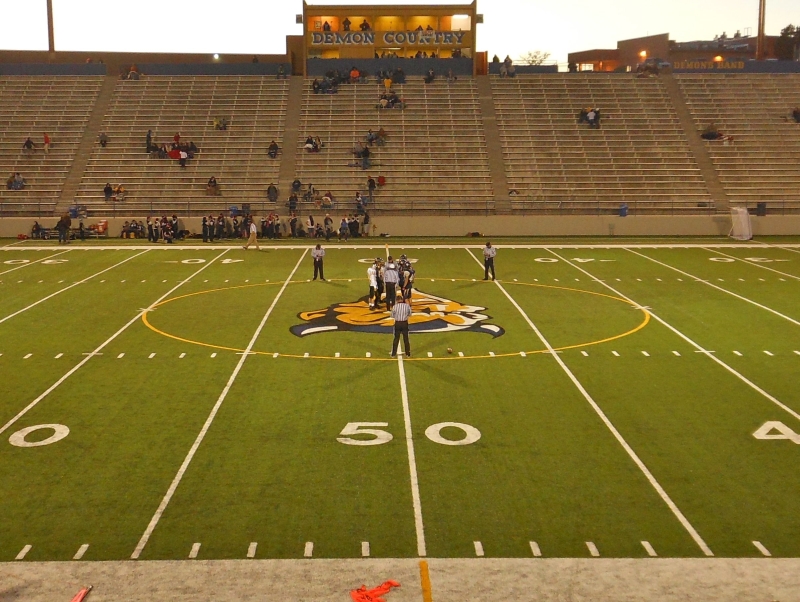 The Santa Fe High School Demon’s starting quarterback (QB) was ejected from the game last week and therefore, by New Mexico Athletic Association (NMAA) rule, was required to sit out Friday night’s game. The second team QB was injured and unavailable so the Demons started the third team QB, a freshman, in the game against the Los Alamos High School Hilltoppers.

The Demons received the opening kick from the Toppers. The Offensive game plan for the Demons was made entirely clear from the first kick-off. They lined up with 7 big O-linemen, and ran the ball behind them with a big FB and around the Toppers with small scat backs. During the first possession, the Demons drove the ball down the field efficiently on the ground. The drive was halted on downs by the Topper defense at the 20. Then both teams traded the ball until a Topper punt pinned the Demons deep. The young Demon QB mishandled the snap, but was able to recover the ball in his own end zone. The Toppers were able to strike first with the safety and led 2-0.

After a stalled Topper drive, they punted from the back of their own end zone. The punt was shanked for a total of -3 yds. SF punched the ball in from the 1 yd line, making the score 21-9. After the kick off, the Topper QB was intercepted after throwing a “duck” into triple coverage. SF scored quickly on a sweep and led 28-9. The Toppers were able to get a drive started after the SF kick off. The drive ended on a red zone interception. The Demons were then able to run out the clock to end the game.